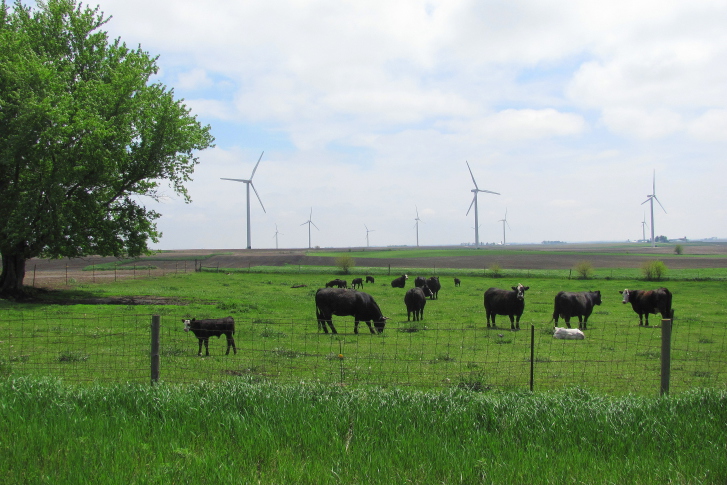 Wind power produced over 190 million MWh of energy in the U.S. in 2015 – making the country No. 1 in global wind production, according to the American Wind Energy Association (AWEA), which analyzed recently released data from the Global Wind Energy Council and U.S. Energy Information Administration.

In another major milestone, more than 31% of Iowa’s in-state electricity generation came from wind power – the first time wind has supplied a state with more than 30% of its annual electricity, says AWEA, which adds that Kansas and South Dakota both generated more than 20% of their electricity from wind in 2015.

“We are proud of Iowa’s leadership in wind energy,” says Iowa Gov. Terry Branstad, who also serves as chairman of the Governors’ Wind and Solar Energy Coalition. “We’ve seen exponential growth in wind energy, and the data released today reinforces what we’ve been seeing in every corner of our state. With potential to jump above 40 percent in the next five years, we are committed to building an even greener Iowa future that will provide our Iowa families with cleaner, renewable energy and job opportunities.”

AWEA says the country’s 190 million MWh produced enough electricity for about 17.5 million typical U.S. homes. China was close behind the U.S. at 185.1 million MWh; Germany came in third with 84.6 MWh.

According to the data, wind energy supplied 4.7% of the total electricity generated in the U.S. in 2015 – enough to supply the equivalent of all electricity demand in Colorado, Oklahoma and Kansas. In comparison, solar energy, including utility-scale and distributed, generated 0.94% of all U.S. electricity in 2015.

For the first time, says AWEA, Texas, Maine and Vermont generated 10% or more of their electricity from wind; these states join Iowa, South Dakota, Kansas, Oklahoma, North Dakota, Minnesota, Idaho, Colorado and Oregon in the “10% and up” club.

AWEA notes that American wind power’s high productivity illustrates the success of the recently extended federal production tax credit, which has attracted more than $128 billion in private investment to the U.S. economy over the last 10 years.

The U.S. now has nearly 75 GW of installed wind power capacity. Last year, wind added 8.6 GW of new electric generating capacity – making it the largest source of new capacity, ahead of solar (7.3 GW) and natural gas (6 GW). An additional 9.4 GW of wind power was under construction at the start of this year, with another 4.9 GW in advanced stages of development, says AWEA.

“The U.S. is blessed with world-class wind resources,” states Tom Kiernan, CEO of AWEA. “We’re tapping into this homegrown resource more than ever, thanks to American innovation and U.S. workers building some of the most productive wind turbines in the world. Now more than ever, low-cost, stably priced, zero-emission wind energy is keeping our air clean and cutting costs for consumers. American wind power is well on its way to supplying 20 percent of U.S. electricity by 2030.”