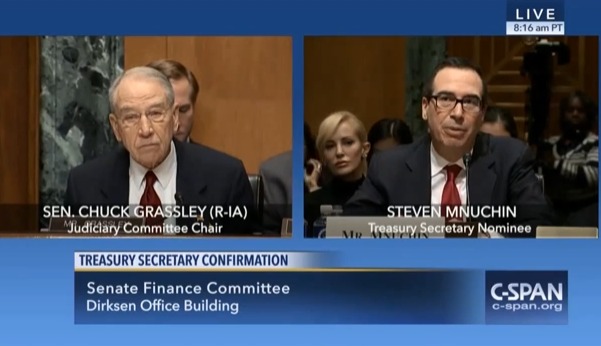 At yesterday’s confirmation hearing for Steven Mnuchin, now-President Donald Trump’s pick for secretary of the U.S. Department of the Treasury, U.S. Sen. Chuck Grassley, R-Iowa, made a plea for a “smooth transition” of the five-year phase-out of the federal wind production tax credit (PTC).

Grassley, known as a longtime wind power proponent and the father of the PTC itself, explains in a statement that he asked the secretary about the “importance of supporting the congressionally established phase-out” of the PTC.

“A smooth transition and the certainty of the phase-out are necessary for a fast-growing industry that supports numerous jobs in Iowa and elsewhere around the country,” the senator continues.

According to a recent report issued by the “A Renewable America” campaign in collaboration with the American Wind Energy Association, adding 10 GW of wind power in Iowa over the next 25 years could save state ratepayers $12.6 billion. Last week, MidAmerican Energy announced plans to build new wind farms in Boone, Greene and Mahaska counties in Iowa. The projects will be the first sites selected for construction under the 2 GW Wind XI project.

“The industry needs to be able to maintain its successful growth even as its tax credit phases out,” Grassley continues.

According to the senator, Mnuchin did, indeed express his support for a smooth phase-out.

The full Grassley-Mnuchin exchange can be watched here or below.