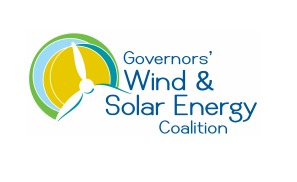 Rhode Island has positioned itself as a leader in offshore renewable energy, says the coalition, referring to the Block Island Wind Farm.

“I am honored to work with Gov. Raimondo,” stated Brownback. “Overseeing the nation’s first offshore wind farm is an extraordinary accomplishment – not only for Rhode Island, but also for the nation.”

The group notes that Kansas has long been one of America’s wind power leaders: The state’s installed wind capacity has doubled three times in the last 10 years. In 2015, wind supplied nearly 24% of the state’s electricity and is on track to exceed 30% this year.

Noting an even bigger goal, Brownback said, “We can generate half of Kansas’s electricity using wind energy. Working with wind developers and developing more transmission, Kansas can grow its renewable energy production even faster.”

Over a decade ago, according to the coalition, many of the nation’s coastal governors supported the policies that created today’s land-based wind industry. Although the coalition’s efforts have always included both onshore and offshore wind energy, there remains a tremendous opportunity to advance the nation’s offshore wind opportunities, which the group has urged congressional leadership and the president to support.

“I look forward to working with Gov. Brownback and our coalition colleagues to help the wind and solar industries diversify our nation’s energy portfolio, enhance environmental quality and support economic development in our states,” said Raimondo.

Raimondo and Brownback both thanked Iowa Gov. Terry Branstad for his leadership of the coalition last year and for his national advocacy for renewable energy. Branstad signed the nation’s first renewable standard, and Iowa now leads the nation in the percentage of wind-generated electricity at almost 35%.

The coalition is meeting today at the Governors’ Offshore Wind Development Summit in Providence.