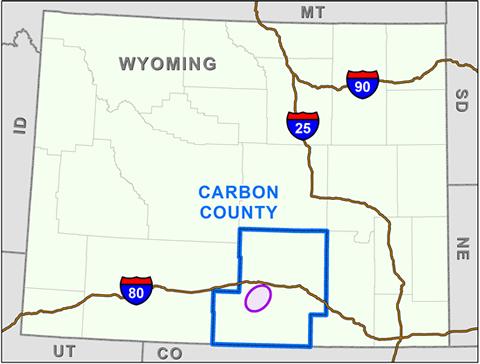 The U.S. Fish and Wildlife Service (FWS) has released its final environmental impact statement on Power Company of Wyoming LLC’s (PCW) voluntary applications for standard and programmatic eagle take permits, both of which are based upon PCW’s comprehensive conservation plans and coordination with the FWS.

The service’s final EIS analyzes avian conservation measures for the 500-turbine, 1.5 GW Phase I of PCW’s Chokecherry and Sierra Madre (CCSM) Wind Energy Project, to be located in Carbon County, Wyo. The two phases are expected to total 3 GW of wind energy.

A notice of availability of the final EIS will be in the Dec. 9 Federal Register. A record of decision will follow no sooner than 30 days afterward, says PCW.

PCW says both plans are built on a foundation of over five years of scientific data-collection, over 5,000 hours of avian use surveys specific to the CCSM project site, and ongoing coordination with the FWS since 2010.

According to the developer, the plans assure that eagle conservation is a priority during both wind project construction (standard permit application) and operation (programmatic permit application). In addition, the plans provide for mitigation and compensation in case of incidental eagle take.

PCW officials say that using site-specific environmental data to finalize the CCSM project’s Phase I design was key to its work to meet the FWS’ strict regulatory criteria.

“PCW chose to commit to a significant scientific and engineering effort to proactively and responsibly minimize impacts to eagles and migratory birds,” states Garry Miller, PCW’s vice president of land and environmental affairs. “It was important to PCW to give our neighbors, regulators and customers further confidence that the CCSM project will be built and operated in a manner consistent with wildlife conservation.”

The CCSM wind farm is a 1,000-turbine project to be built in two phases on a working cattle ranch consisting of checkerboard private land, federal land and state land.