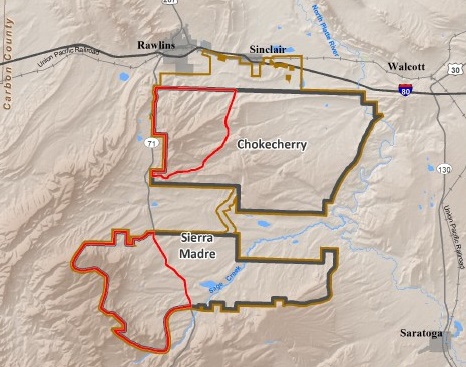 The Draft EIS analyzes avian conservation measures and planning specific to Phase I of the proposed 3 GW Chokecherry and Sierra Madre (CCSM) Wind Energy Project. A formal 60-day public comment period will begin when the Notice of Availability of the Draft EIS is published in the Federal Register.

In addition to removing, relocating and adjusting Phase I wind turbines based on years of site-specific data, PCW has voluntarily set aside over 105,000 acres, or about 33%, of the 320,000-acre Overland Trail Cattle Co. ranch as specific “turbine no-build areas.” PCW also intends to place a conservation easement on 27,500 acres of private land that will benefit eagles and other wildlife.

According to PCW, both plans are built on a foundation of over five years of scientific data collection and over 5,000 hours of avian use surveys specific to the CCSM project site. The plans are designed to be consistent with the FWS’ Eagle Conservation Plan Guidance and Land-Based Wind Energy Guidelines.

Under the FWS’ 2009 Eagle Permit Rule that applies to a variety of human activities and industries, the FWS may “authorize the limited take of bald eagles and golden eagles under the Bald and Golden Eagle Protection Act, where the take to be authorized is associated with otherwise lawful activities,” such as generating clean, cost-effective wind energy supplies.

The FWS approves programmatic permits only when rigorous conditions and requirements are met, including developing a detailed evaluation of the risk to eagles, implementing all practicable measures to reduce that risk, and providing mitigation and compensation in the event of take.

“We worked closely with the U.S. Fish and Wildlife Service, Bureau of Land Management, Wyoming Game and Fish Department, and expert environmental consultants throughout the process to develop a wind project that meets the high conservation standards that an eagle take permit requires.”

Phase I of the CCSM Project – at 1,500 MW of nameplate capacity – is estimated to produce nearly 6 million MWh of clean electricity per year.

The FWS will host two public open houses in Carbon County, Wyo., to allow the public to review the Draft EIS, ask questions and provide written comments for consideration as the FWS prepares its Final EIS. The meetings will be 4:30 p.m. to 6:30 p.m. on June 6 in Saratoga and June 7 in Rawlins. The FWS’ environmental analysis documents are available here.