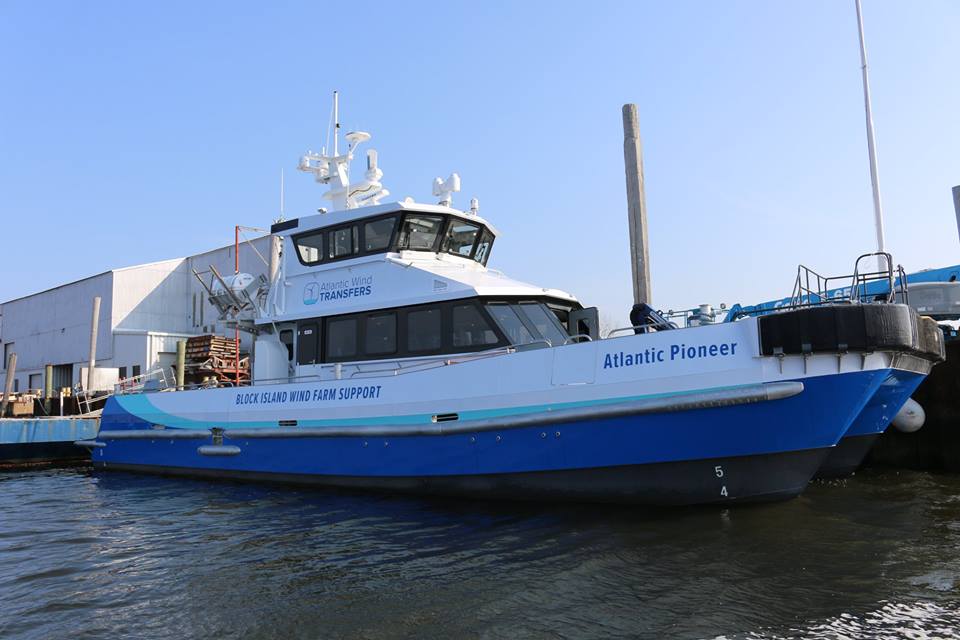 Atlantic Wind Transfers, the commercial wind support services arm of Rhode Island Fast Ferry, has embarked on the first phase of a 20-year charter to support the construction and operations of the Block Island wind project, set to be the first offshore wind farm in U.S. waters.

The 30 MW Block Island site is currently under construction by developer Deepwater Wind off the coast of Rhode Island.

For the lifetime of the project, Atlantic Wind Transfers – in its newly christened vessel, the Atlantic Pioneer – will provide transfer services for crew and equipment. The Atlantic Pioneer, built in Rhode Island, is a 21-meter aluminium vessel designed by U.K.-based South Boats IOW, which has built approximately 81 crew transfer vessels for the European offshore wind sector.

The vessel is able to safely deliver 16 technicians – along with three crew and 12 tons of equipment – directly to the base of a turbine or offshore platform. With a fuel capacity of 2,100 gallons, the Atlantic Pioneer can operate for several days at a time between refueling and reach a maximum speed of 30 knots, according to Atlantic Wind Transfers.

For the first month of its charter, the Atlantic Pioneer will support subsea cabling specialist Durocher Marine by delivering technicians and their equipment to and from shore as interarray cables are winched into place and connected at each of the turbine foundation sites. Following this phase of work, Atlantic Pioneer will be deployed to support Fred Olsen’s Brave Tern jack-up installation vessel as it lifts each of the five Alstom Haliade 150 6 MW turbines into place.

“After 12 months in build and undergoing extensive sea trials, Atlantic Pioneer is ready to get straight to work – delivering a first-class service to Deepwater Wind and the teams of specialist contractors responsible for bringing the Block Island offshore wind farm to fruition,” says Charles A. Donadio Jr., president of Atlantic Wind Transfers.

The Block Island project is due for completion in the fourth quarter of this year. Following commissioning, Atlantic Wind Transfers will support ongoing operations and maintenance activity.

“This is a significant milestone and shows our local industry is ready and able to take advantage of opportunities in clean energy and rise to the challenge of supporting large-scale marine infrastructure projects,” says Rhode Island Gov. Gina Raimondo. “Rhode Island is truly leading the way for the rest of the country in offshore wind, and these contracts will create local job opportunities in our state for years to come.”