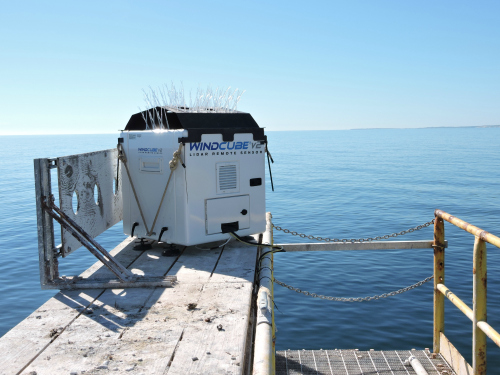 A WINDCUBE vertical-profiling LiDAR system has been installed off the south coast of Massachusetts to provide a continuous record of the wind resource across the full vertical rotor span of wind turbines used in offshore wind farms.

Funding for the installation was provided by the Massachusetts Clean Energy Center (MassCEC) as part of its Metocean Initiative, designed to advance the planning and permitting of offshore wind energy in the region while reducing cost. Renewable NRG Systems supplied the LiDAR system and will perform biennial maintenance services from its headquarters in Hinesburg, Vt.

Located in a fixed position on the MVCO’s Air-Sea Interaction Tower platform, the WINDCUBE will collect data that will be used for validation and improvement of existing wind models. In addition, according to the partners, the technology will increase industry and regulatory confidence in the value of the wind resources off Massachusetts and Rhode Island.

The WINDCUBE will also serve as a future reference for validating floating LiDAR systems that could be deployed within nearby commercial Wind Energy Areas. The technology could provide bankable, on-site data for project development purposes, the partners say.

“Massachusetts’ forward-looking and targeted investments in research and infrastructure have made it the epicenter of the offshore wind industry in the United States,” said Stephen Pike, interim CEO of MassCEC. “This data is essential to developers as they plan construction of their projects – making partnerships like this one with RNRG and AWS Truepower critical to the growth of the Massachusetts and U.S. markets.”