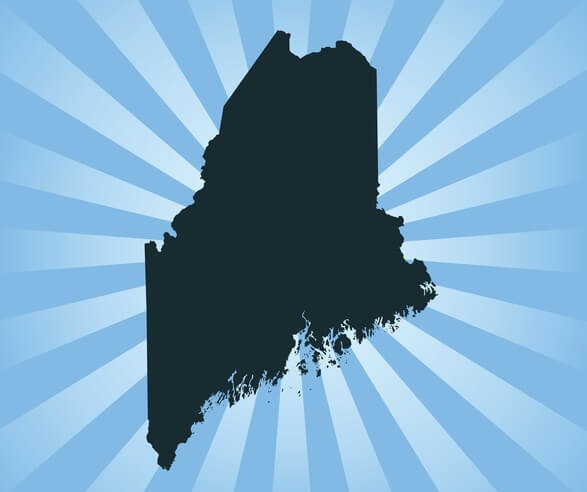 Ten years ago, Maine’s Task Force on Wind Energy set ambitious goals for wind development in the state, including a 2015 target of 1,000 MW and a 2020 target of 3,000 MW (including 300 MW offshore) of installed capacity.

Today, Maine has less than 1,000 MW of installed capacity and has yet to develop any offshore wind projects. The new year has brought only bad tidings for the future of wind energy development in Maine: The Maine Public Utilities Commission (PUC) is reconsidering an offshore pilot, Gov. Paul LePage is seeking to limit new development, and Maine wind failed to succeed in Massachusetts’ recent clean energy request for proposals (RFP). Below is a recap of the latest wind power developments so far this year.

PUC Reconsiders Aqua Ventus
In January, the Maine PUC issued an order requesting comments on whether it should reconsider its approval of a term sheet for the Maine Aqua Ventus (MAV) offshore wind project.

MAV is a proposed 12 MW floating offshore wind pilot project to be sited near Monhegan Island, approximately 12 miles off the coast of Maine. In 2014, the PUC approved a term sheet that included a 20-year term price of $0.23/kWh during the first year and an increase of 2.25% in each subsequent year. Three years after the initial approval, MAV and Central Maine Power submitted a contract for PUC approval last December.

Instead of approving the contract, the PUC is seeking comments on whether any developments since the 2014 approval warrant reconsideration of the MAV project, including (1) a decline in energy prices, (2) technological advances in offshore wind technology, (3) Maine’s renewable energy goals, (4) the economic benefits of the project, and (5) various project-specific circumstances that may have changed since the original approval.

The deadline to file comments is today, Feb. 14.

The governor will select the members of the advisory commission and has instructed that its meetings and documents will not be subject to Maine’s Freedom of Access Act.

The Conservation Law Foundation has filed suit against the governor in state superior court, alleging that the moratorium on new wind energy permits is void for violating the separation of powers under the Maine Constitution.