Home Recent New & Noteworthy What Are The Market Effects Of Wind Penetration In ERCOT? 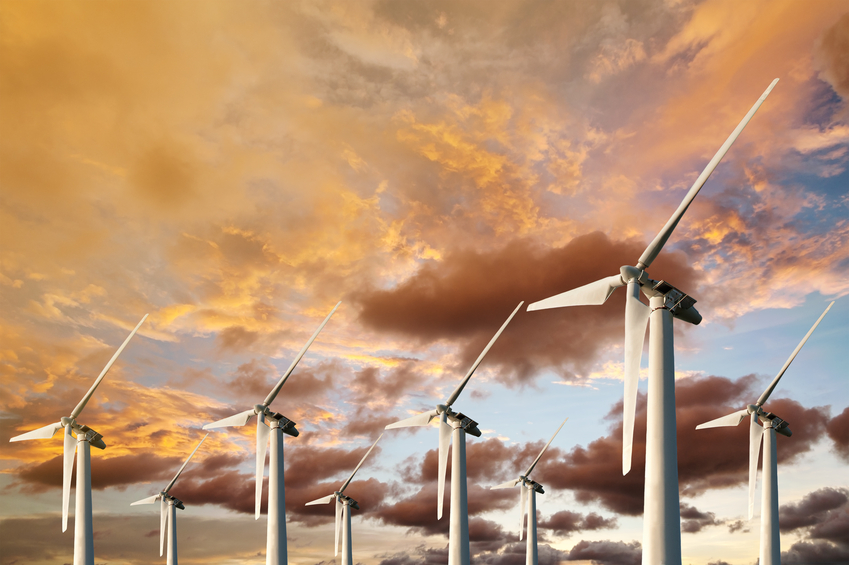 In recent years, the Electricity Reliability Council of Texas (ERCOT) region has experienced unprecedented expansion of wind generation capacity. Furthermore, wind generation in ERCOT is expected to keep growing in the coming years.

Through market simulations with the firm’s UPLAN Network Power Model, LCG Consulting has conducted a study that looks at the potential impact of further wind capacity expansion in the ERCOT market.

LCG has developed scenarios for the 2021 calendar year for three cases of wind capacity assumptions: 15.8 GW, 22.9 GW and 30 GW. With all other factors held constant, these simulations isolate the effects that wind generation will have on energy and ancillary service prices in the ERCOT market.

The results? The UPLAN simulations indicate that with higher wind energy deployment, energy prices will be lower, and ancillary service prices will be higher.

The second scenario, 22.9 GW of installed wind capacity, represents a conservative estimate of the likely wind capacity to be operational by 2021. For point of reference, 23.1 GW of wind generation is operational by 2019 if one includes all development projects identified in ERCOT’s August 2016 Generation Interconnection Status Report (GIS) as having executed an interconnection agreement, posted financial security and scheduled to be operational.

Comparing this 22.9 GW scenario to the 15.8 GW scenario can give insight into how the market may be affected as we move from current installed capacity to a level more representative of ERCOT’s current GIS reports.

The third scenario, at 30 GW, explores a high wind investment that might be prompted by a variety of factors, including lower costs, wind turbine technology improvements leading to higher capacity factors, federal legislative limitations on greenhouse-gas emissions and/or additional or extended tax incentives, and transmission upgrades. 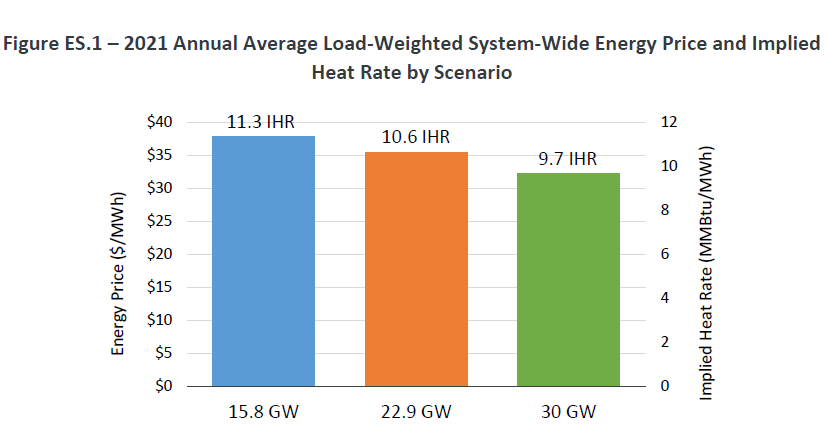 A relationship can be observed between levels of system-wide net load (defined as total customer demand less the energy provided by wind generation) and prices of ancillary service products, particularly regulation up service (URS), regulation down service (DRS) and responsive reserve (RRS).

The following figure shows simulation results from the 22.9 GW wind scenario illustrating this relationship. As shown below, at both the higher and lower ends of net load, URS and RRS prices increase. In addition, at very low levels of system-wide net load, the average price of DRS is higher. In contrast, energy prices have a direct relationship with net load for all levels: higher when net load is higher and lower at low net load levels. 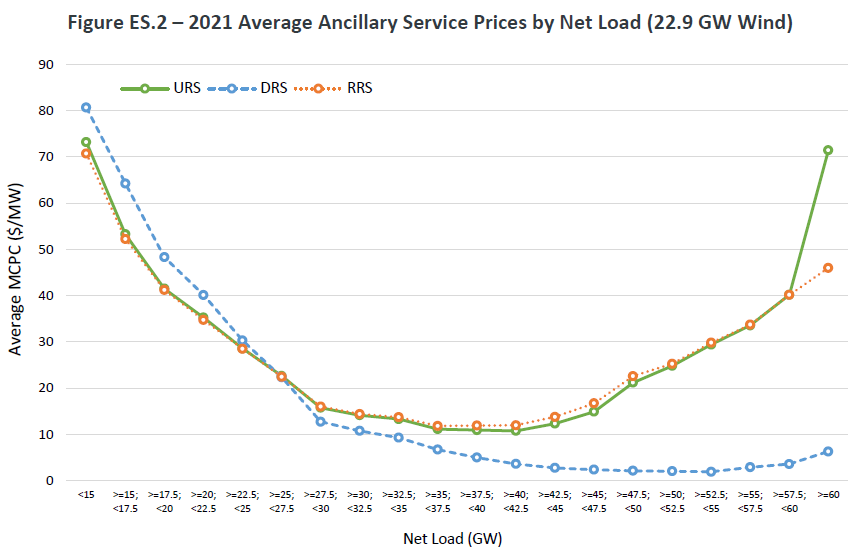 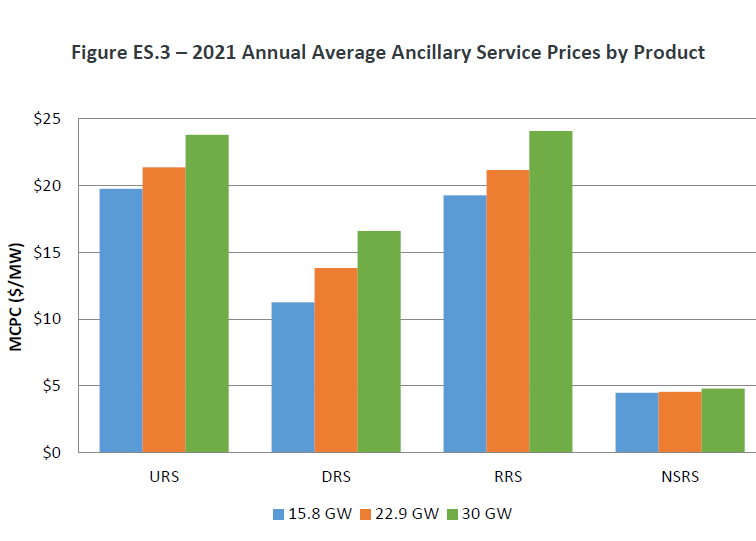 In the 2021 UPLAN simulations, the annual average operating reserve demand curve (ORDC) price adder is significantly higher than in the 2015 ERCOT market due to the expected increase in load with little thermal generation expansion.

However, the ORDC price adder declines as wind generation increases across the modeled 2021 scenarios, as net load is reduced with greater wind generation.

The study assumes only capacity additions and retirements that are currently announced by the ERCOT ISO – with the exception of the variation in wind additions reflected by each scenario. Non-wind capacity expansion for purposes of this study considers those units that have a signed interconnection agreement and have posted financial security according to ERCOT’s August 2016 Generator Interconnection Status Report.

Retirements are based on scheduled retirements announced by the ISO. Further retirements would affect the energy and ancillary service markets, and LCG says it leaves the analysis of these impacts to future studies.

This article was posted with permission from an executive summary of a report from LCG Consulting, “Market Effects of Wind Penetration in ERCOT: How Wind Will Change the Future of Energy and Ancillary Service Prices.”