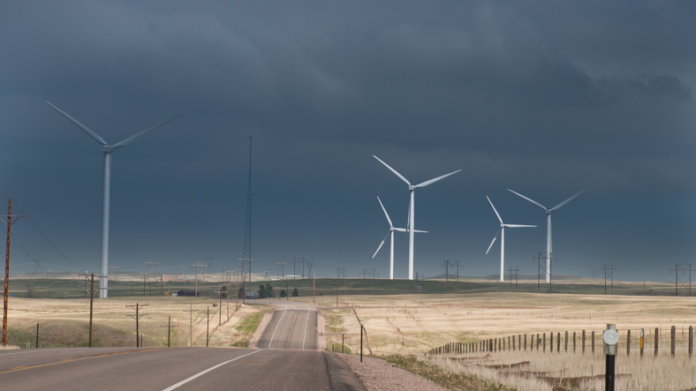 Comparatively, the U.S. wind industry installed 626 MW during the second quarter. According to AWEA, the more than 54,000 wind turbines operating in 41 states plus Guam and Puerto Rico represent enough capacity to power 27 million average U.S. homes.

Notably, seven states now have enough wind projects under construction or in advanced stages of development to more than double their current wind capacity. Those include heartland states with land-based wind under development – Arkansas, Nebraska, New Mexico, South Dakota and Wyoming – as well as coastal states Maryland and Massachusetts, where offshore wind is poised to scale up, the report says.

As the industry expands, wind turbines themselves are growing much more powerful and efficient at delivering energy to American homes and businesses, the report points out. Longer blades are helping turbines capture more wind, and new wind farms are leveraging big data and machine learning to improve power output and reduce downtime by anticipating maintenance problems before they arise. These advances drive down costs and translate into major efficiency gains, AWEA explains.

The average utility-scale wind turbine installed in 2017 was rated at 2.32 MW, enough to power over 750 American homes for a full year. And, according to the report, more powerful wind turbines are on the horizon: In the third quarter, new orders for wind turbines included land-based turbines above 4 MW for the first time, which are capable of powering 1,400 homes per year.

The report notes there is a strong near-term wind farm pipeline comprising 37,965 MW of capacity. These wind farms are either actively under construction or have entered advanced stages of development through a major milestone, such as placing a turbine order or finding a buyer for their power. During the third quarter, projects totaling 2,180 MW started construction, and a further 2,327 MW entered advanced development.

Over the last several years, the report says, non-utility customers, including major consumer brands, cities, universities and even the U.S. military, have become a major source of demand for wind power. In just three quarters of 2018, non-utility wind energy customers signed contracts for more wind power capacity than in any other year. First-time buyers included Smucker’s, Boston University and Royal Caribbean. Cumulatively, non-utility purchases of wind power capacity in the U.S. have exceeded 10,000 MW.

Utilities signed contracts for 1,522 MW of wind capacity in the third quarter, including the largest procurement of U.S. offshore wind to date from the 800 MW Vineyard Wind project with utilities Eversource Energy, National Grid and Unitil.

“The wind is always blowing in the U.S., and the latest wind turbine technology helps affordably and reliably put more of that natural resource to work,” states Tom Kiernan, CEO of AWEA. “With projects underway in over 30 states, wind is rapidly expanding as a major source of American energy, good jobs and clean air.”

Most Utility Scale Wind Turbine manufactures seem to concentrate on the well known Radial Bladed Wind Turbine Rotors. Since the rotor mass increases as the cubic power of the blade length, the practical power rating of such rotor is limited to 12 MW/unit.

If the rotor configuration is changed from Radial to Axial Flow Helical Bladed configuration, the power rating can be increased up to 50 MW/unit as DOE anticipated.
Our preliminary analysis, results in a significantly light weighted rotor and an inexpensive rotor design.
I appreciate your comments and suggestion to bring the technology to commercial use.