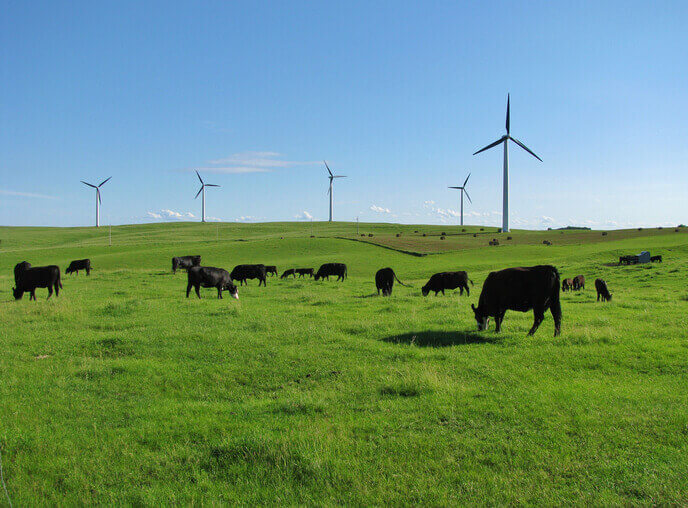 A burst of new wind farm announcements in the first quarter of 2019 propelled the total volume of U.S. wind power construction and development activity to a record level, according to the newly released “U.S. Wind Industry First Quarter 2019 Market Report” from the American Wind Energy Association (AWEA).

The AWEA report reveals that U.S. project developers announced new wind farms with a total capacity of 6,146 MW in the first quarter of 2019, which is more than the capacity of all the currently operational wind farms in California.

The additional capacity brings the U.S. construction and advanced development pipeline to a new record of 39,161 MW, representing an 11% increase over the previous quarter.

“With nearly 40,000 MW in development, America’s largest source of renewable energy generating capacity is on a path to grow by 40 percent in the near term,” notes Tom Kiernan, CEO of AWEA. “In doing so, we’ll create thousands of additional American jobs and new economic opportunities for factory towns and rural communities across the country.”

Project developers also reported 21,949 MW of wind capacity in the advanced development stage, which also reached a record level. Projects in advanced development have not yet begun construction but are likely to come online in the near term because they have either signed a long-term contract, placed turbine orders or are proceeding under utility ownership, says the report.

A total of 841 MW of wind projects came online during the first quarter, elevating the country’s total installed capacity to 97,223 MW. With 536 MW brought online, Iowa led the nation in new capacity installations.

Further, according to the report, the first quarter of 2019 saw the second-strongest volume of power purchase agreements (PPAs) since AWEA began tracking procurement activity, with 2,717 MW of wind PPAs signed. Utilities signed contracts totaling 2,694 MW, led by Northern Indiana Public Service Co. and National Grid. In addition, utilities announced plans to build and own 1,049 MW of wind in the first quarter, the report notes.

In addition, the number of projects deploying even more powerful and efficient wind turbines is growing: Nearly 30% of projects that have already selected a turbine model are deploying turbines with nameplate capacities of 3 MW or higher – with 3.5 MW and larger models being used in 18 different projects. Expanding turbine model variety allows developers to better customize wind farms to their local resource and deliver even more affordable energy to consumers, explains AWEA.

On the offshore front, the year kicked off with an ambitious announcement from New York Gov. Andrew M. Cuomo, who increased the state’s offshore wind goal to 9,000 MW by 2035, up from the previous target of 2,400 MW. In February, New York received bids from four offshore developers in response to its first solicitation for at least 800 MW of offshore wind. The winning bid will be announced later this spring.

Additionally, National Grid filed for approval of a 20-year contract to buy 400 MW from the Revolution Wind offshore project at a fixed price of $98/MWh.

could these storage unit be built underground to help keep it cool…. and possibly with green wall and roof… lol…

What does AWEA consider “advanced development”?

The ERCOT-registered development pipeline alone has nearly 36GW of wind power (as of the March report – expect April to be published shortly). Nearly 15GW of that has an interconnection agreement already signed.