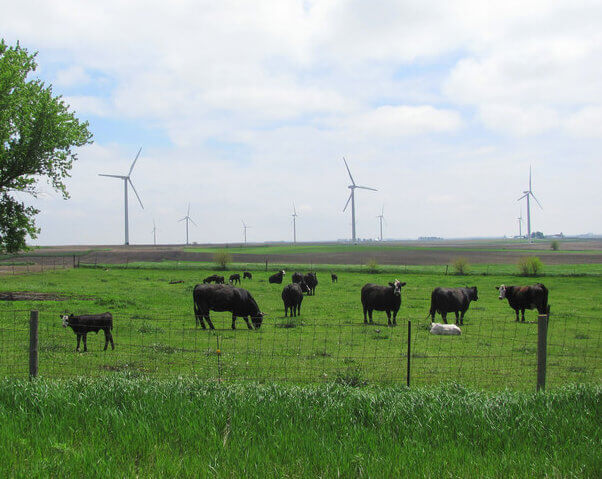 MidAmerican Energy has begun construction activity on the North English wind farm, whose completion is scheduled for December 2018. The wind farm will share an operations and maintenance building in Montezuma with the Prairie wind farm, currently under construction in neighboring Mahaska County. In January, the company announced the 168 MW Prairie and 170 MW Beaver Creek wind farms as the first two projects for Wind XI.

The North English wind farm will add up to 170 2.0 MW Vestas wind turbines with a combined capacity of 340 MW of new wind generation. Furthermore, MidAmerican Energy expects to pay up to approximately $137 million in county property taxes and up to approximately $114 million in landowner lease payments over the 40-year lifespan of the project. MidAmerican purchased the project from Tradewind Energy.

“We are thrilled to support Iowa’s continued leadership in wind energy through the development of the North English Wind Project,” says Jeff Hammond, senior development manager for Tradewind. “MidAmerican Energy Co. has a vision to provide 100 percent renewable energy for its customers, and it’s exciting to partner with them toward achieving that goal.”

MidAmerican is working with developers, county officials and landowners at potential wind farm sites in other Iowa counties for the balance of the Wind XI project. Altogether, the $3.6 billion Wind XI project will consist of up to 1,000 wind turbines and a whopping 2,000 MW of wind capacity in Iowa when complete in December 2019.

In total, the Des Moines, Iowa-based energy company expects the Wind XI project to produce $1.2 billion in economic benefits for Iowa communities as a result of landowner easements and property tax payments over the next 40 years. Additionally, during construction, thousands of jobs are expected to be added to Iowa’s economy, and hundreds of new permanent jobs will be added when the expansion is complete. MidAmerican Energy notes it is not asking for an increase in customer rates or financial assistance from the state to pay for the Wind XI project. Rather, the development will help provide stable rates for customers without requesting an increase until at least 2029, the company adds.

In other news, wind power reportedly provided 100% of the power for MidAmerican Energy Iowa customers last Monday and Tuesday (Oct. 23-24).

According to a local report from KCCI, the company says wind supplied energy for all 670,000 of its customers in the state on the particularly windy days.

Tina Hoffman, a MidAmerican spokesperson, told KCCI that wind is “one of the great resources in Iowa, and what we are able to do is use that to provide electricity for customers.”

The company recently announced it would be upgrading hundreds of its older wind turbines in Iowa in order to extend the life of the machines. In total, MidAmerican serves 760,000 electric customers and 742,000 natural gas customers in Iowa, Illinois, Nebraska and South Dakota.