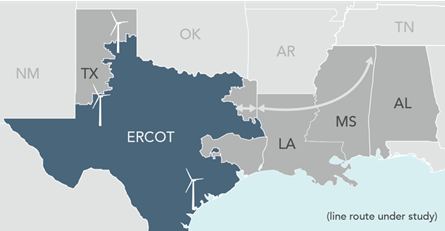 The proposed Southern Cross Transmission project would provide significant economic benefits to the project’s areas within Louisiana and Mississippi, according to Pattern Development, citing a study conducted by Moss Adams LLP.

The Southern Cross Transmission project is a 500 kV, high-voltage direct-current (HVDC) transmission line with a base load capacity of 2 GW (delivered in either direction after losses). It would link wind energy in Texas to the transmission grid and customers in the Southeast.

The project is expected to start construction in 2018 and begin delivering power in 2021.

Specifically, the Moss Adams study found that the project would provide the following impact to Louisiana and Mississippi:

“The Southern Cross Transmission project would be the only project to connect low-cost renewable energy in Texas to the Southeast while also creating jobs and generating strong economic impact in both the southern states and Texas,” says Mike Garland, CEO of Pattern Development. “The Southern Cross project will be one of the nation’s first overhead HVDC transmission lines constructed in nearly two decades. When complete, the project will provide significant reliability and economic benefits by connecting two robust systems. All of the capital investment required for the project is being provided by private investors.”

The Moss Adams study concluded that the project is expected to generate a direct economic impact over 30 years of about $1.05 billion in Mississippi and $1.05 billion in Louisiana – excluding the benefit to the Southeast of low cost wind power from Texas, says Pattern Development.

The direct economic impact includes the cost incurred during development, construction, and operation of the project. In addition, the indirect and induced impact of $1.4 billion is a result of additional economic activities resulting from the project.

The study finds that the project would generate annual average property tax payments of approximately $14.7 million, including $6.5 million in Louisiana and $8.2 million in Mississippi each year – totaling $441 million in property taxes in both states over 30 years.

In addition, according to the study, the project would generate $3.9 billion in total direct, indirect, induced and fiscal economic impact across the two-state study area.

Project employment during the peak of the construction phase is anticipated to exceed 650 jobs, the study finds. Over the past month, Pattern Development has held vendor fairs in Louisiana and Mississippi to identify local vendors and contractors interested in participating.