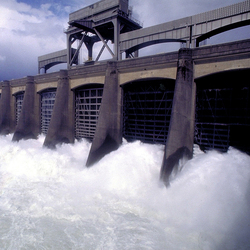 A group of salmon advocates is siding with wind developers in their battle against system operator Bonneville Power Administration (BPA).

High seasonal river flows resulting from runoff from large snowpacks caused an overabundance of hydropower and left no room on the grid to accommodate wind power. This led the BPA to curtail wind production this spring, which angered wind developers and prompted them to file a complaint with the Federal Energy Regulatory Commission (FERC) in June.

The developers, including Iberdrola, Horizon Wind Energy, NextEra Energy Resources and Invenergy, say they have lost millions of dollars in revenue because of the wind curtailment.

In the period from May 18 to July 10, the BPA says it ordered wind generators to shut down for several hours, typically in the low-power-demand nighttime hours. According to the BPA, about 6% of its scheduled wind generation had been curtailed.

The BPA, which is mandated to ensure system reliability, says it was justified in its actions and claims one of the reasons for stopping wind power output was to protect salmon.

Save Our Wild Salmon, an environmental advocacy group, says the BPA's characterizations are not based on science and calls the system operator's actions ‘irresponsible.’

‘BPA's position that they had to curtail wind power's access to the power grid as a result of protections for endangered salmon is not scientifically supported,’ says Amy Baird, communications director at Save Our Wild Salmon. ‘The reality is that the wind energy sector and salmon recovery are very much linked – not at odds – with each other.’

On July 19, salmon advocates filed a motion to intervene in the FERC filing to support the wind industry and protect endangered salmon. While the BPA's actions angered wind developers, its method of releasing water also raised the ire of environmental groups concerned with salmon protection.

In its response to the FERC filing made by wind advocates, the BPA said the excessive runoff hampered its ability to store water in reservoirs, leaving less flexibility to manage water flows for power production. One common way to release water is over the dams in a process that is referred to as ‘spilling.’

‘With less ability to store spring runoff (water flow caused by rain, snowmelt and other sources), high-water events can create conditions that are harmful to aquatic life,’ the BPA wrote in its response to FERC. ‘If water cannot be stored, additional power must be generated with the water, or the water must be spilled through the dams' spillways (channels to permit the release of excess water). Spilling water can aid fish migration and increase survival rates.’

Spilling water, however, is not always an option, because the force of falling water creates bubbles that dissolve as gas in waterways, causing harm to fish and violating the Clean Water Act, according to Michael Milstein, a BPA spokesperson.

To avoid disruptive spilling and to protect fish, Milstein says the agency must run as much water as possible through the electricity turbines rather than through the spillways. Conversely, he adds, water that moves through turbines introduces significantly less gas into the river.

However, that point is up for debate. Spilling, if done carefully, ‘represents the safest solution to the salmon,’ says Baird. ‘BPA's claims are not scientifically accurate.’

The BPA's argument citing dangerous total dissolved gas (TDG) levels above the Washington state standard of 115% does not appear to hold much water based on early in-river data, Baird says.

Citing the group's FERC filing, she says, ‘Even with some of the highest flows in recent memory and involuntary spill amounts causing TDG levels well above 130 percent at many dams, there has been very little in the way of gas bubble trauma in smolts at a level of biological concern.’

With the water runoff subsiding, area parties are beginning to plan ahead for future runoffs.

‘We hope to spur some improvement in policy for future high-water years,’ says Baird. ‘Salmon and wind can peacefully co-exist, and for BPA to blame salmon for the disruption in the Northwest is irresponsible.’

For the BPA's part, Milstein says the agency is reviewing alternative measures it could have taken.

‘We are going back and reviewing what we learned from this past season,’ Milstein says. ‘In most years, hydro and wind are very complementary.’