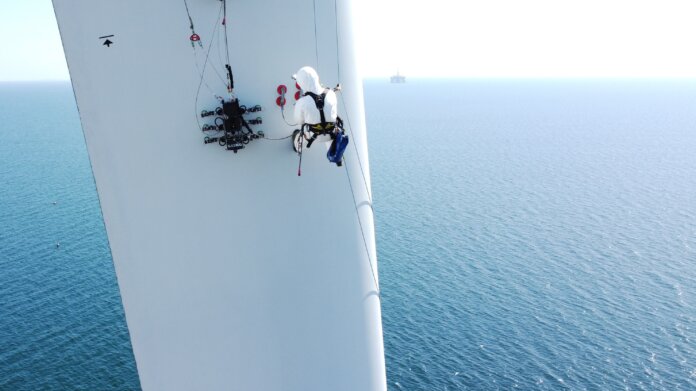 The Offshore Renewable Energy (ORE) Catapult and GE Renewable Energy have partnered to develop a robotic solution for ensuring the integrity of the millions upon millions of bolts that hold wind turbines together – a move that is described as essential to the expansion of offshore wind.

GE Renewable Energy, which plays a supporting role on the new project as technology advisor, estimates that the companies’ technology fusion will unlock cost savings of 75% in bolt maintenance and repair bills. The potential market prize ahead of the solution’s developers is estimated at £150 million per year by 2030.

The technologies at the heart of this project were developed under previous projects funded by Innovate UK and in collaboration with ORE Catapult. BladeBUG’s crawling robot inspects and repairs blade surfaces, a task that currently requires technicians to scour every inch of their surfaces; EchoBolt’s device can detect bolt tension using ultrasonics without the need for laborious loosening and retightening with hydraulic tools.

There are more than 30,000 blades and more than 10 million bolts in the U.K. wind sector that require this level of maintenance. To meet the U.K.’s net-zero target of 75 GW of offshore wind capacity by 2050, technicians of the future would need to cover almost a quarter of a million blades and 79 million bolts. However, without using robotics and smart technologies, this scale of expansion will simply not be technically or financially feasible, according to ORE Catapult.

“As offshore renewables expand and these maintenance tasks become truly mammoth, robotics will be a vital part of the mix, and we see them both working autonomously and alongside offshore technicians,” says Peter MacDonald, head of engineering at ORE Catapult. “In addition, these solutions pave the way for remote operation from onshore control centers and cross-discipline job creation opportunities.”

BladeBUG has previously proven its abilities to walk and inspect blades at ORE Catapult’s Levenmouth Demonstration Turbine, while the EchoBolt technology has been validated through trials in bolt inspection at the same test turbine and on GE’s Haliade-X, the world’s biggest offshore wind turbine nacelle.