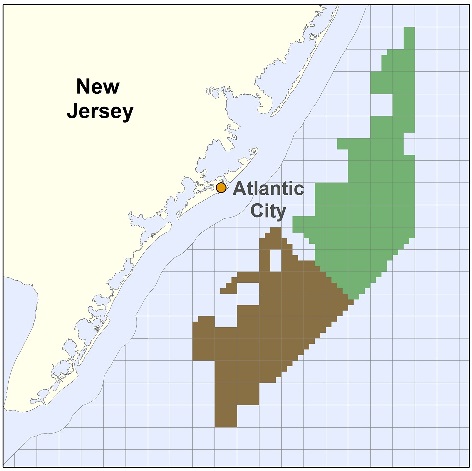 According to an analysis prepared by the U.S. Department of Energy's National Renewable Energy Laboratory, if fully developed, the area leased could support about 3.4 GW of commercial wind generation – enough electricity to power about 1.2 million homes.

The federal auction is part of President Obama's comprehensive Climate Action Plan to create American jobs, develop domestic clean energy resources and cut carbon pollution. However, the auction comes amid uncertainty regarding New Jersey's offshore renewable energy certificates, which have yet to be formally implemented.

Each lease will have a preliminary term of one year, during which the lessee will submit a site assessment plan to BOEM for approval. Once the plan is OK'd, the lessee will have four-and-a-half years to submit a construction and operations plan (COP) to BOEM for approval. Once BOEM receives a COP from a lessee, the bureau will conduct an environmental review of that proposed project.

The DOI notes that public input will be an important part of BOEM's review process. If the COP is approved, the lessee will have an operations term of 25 years.

"Today's auction underscores the emerging market demand for renewable energy and marks another major step in standing up a sustainable offshore wind program for Atlantic coast communities," states Sally Jewell, U.S. secretary of the interior. "Through extensive outreach and public engagement, we reduced potential use conflicts while moving the country closer to harnessing the enormous potential of wind energy along the Atlantic coast."

More information on the auction can be found here.