Funded by the U.S. Department of Energy (DOE) Wind Energy Technologies Office, the study will amass a comprehensive dataset on a wind energy atmospheric phenomenon – wakes – that can cost the average wind farm about 10% of its potential energy. Once complete, those data could help wind farms – and farmers who lease their land – produce even more energy.

Like motorboats, fast-moving wind turbine blades create wakes that can change how much energy reaches downwind turbines and plants. But current energy prediction models are too imprecise to tell exactly how much wakes cost in terms of lost energy or profits – or how to prevent that loss.

“This field campaign will give us the highest resolution observations of wind farm atmosphere interactions available in the world today,” said Patrick Moriarty, a senior engineer at NREL who is leading the AWAKEN project.

Previously, Moriarty and his NREL colleagues designed models and simulations to estimate how winds might move through wind plants. But without observational data to back them up, Moriarty said, “we don’t know how accurate our models are.” Now, from the spring of 2022 through October 2023, the team will gather this observational data using a vast array of sensors, including those mounted on aircraft, in and around operational wind farms.

But before any data collection could happen, Moriarty and his research team needed to find the right locations to place their instruments to get clear shots of the turbines. “If there are trees or buildings or hills in the way, that would block our efforts,” Moriarty mentions. And there were: During a July field trip to Oklahoma, the team found plenty of obstacles to navigate.

Then, once they found optimal spots to nestle their sensors, the researchers had to convince landowners to house them—in exchange for rent, of course. Back in July, Moriarty met one “very friendly” rancher who peppered the researchers with questions about the wind farms in his backyard. Kerr is not the only one interested in a new kind of farming.

For the next several years, those sensors will train their lasers on five wind farms in northern Oklahoma—a location chosen for its large number of current wind farms and great future potential. Posted on or near turbines, the sensors’ laser and radar beams (like those used by traffic cops to monitor vehicle speeds) will reflect dust and bugs – because different wind speeds and paths change how those particles wobble, that data can help create a three-dimensional picture of how wind currents are moving around the turbines.

But large-scale wakes can persist 20 miles or more and reach entirely different wind plants. “No observation system has that kind of range,” Moriarty says. “Sooner or later, you need an aircraft.”

For the final step of the AWAKEN field campaign, specialized aircraft will fly sensors from plant to plant to collect that large-scale data and understand how wakes from one wind plant might affect its neighbors. At the same time, drones will use faster sensors to pick up more precise data than previous tools.

Then, when the data are compiled in 2023, the researchers will map out atmospheric effects and create an open-source, globally accessible dataset (to be hosted in the DOE Wind Data Archive and Portal). That data could give wind farm developers much-needed guidance on how to position their wind turbines to maximize their plants’ energy production. Such well-informed wind plant designs could potentially generate up to 5% more energy (and, with it, more revenue).

After AWAKEN wraps up, Moriarty hopes to perform a similar massive field campaign to map out wake effects in offshore wind plants – especially floating plants, for which little data exist. But Moriarty also hopes to improve their data collection tools to eventually make an even higher-resolution map of how winds move through wind plants. 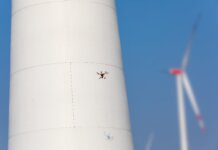