The National Renewable Energy Laboratory (NREL) has awarded three industry teams funding to support research on bats and wind energy projects. Selected through the NREL Enabling Coexistence Options for Wind Energy and Wildlife (ECO Wind) program’s first competitive request for proposals, which was opened in October 2021, the awardees will receive a portion of the $1.1 million total to research how bats behave near wind turbines and wind power plants.

When it comes to wind energy and wildlife, bats are a particular area of concern. Available data indicates that migratory tree-roosting bats, such as the eastern red bat, hoary bat and silver-haired bat, are most at risk. However, much about these elusive, nocturnal creatures’ interactions with wind turbines remains a mystery.

“For reasons we are still working to understand, some bats seem to be attracted to wind turbines,” says NREL researcher Cris Hein, who leads NREL’s wind energy environmental science portfolio. “In previous studies, we’ve seen bats approach and investigate the different components of wind turbines, including the blades. As bats spend more time flying near the fast-moving blades, the risk of collision increases.”

Understanding this behavior may help improve strategies to minimize these interactions, which can be done with smart curtailment (slowing down or stopping the rotation of turbine blades when bats are present) or deterrents (devices that discourage bats from approaching wind turbines).

The awardees will track bat movements at operating wind energy facilities over the next two years. All three teams will conduct their research using thermal imaging, which uses a special kind of video camera to capture the heat signature of bats’ bodies so they can be detected at night without adding any light.

The research team from Bowman and Wildlife Imaging will assess thermal video footage collected at wind energy facilities in Minnesota and Texas. The team will compare bats’ flight behavior at the various locations to determine relationships between bat behavior and collision events and to expand knowledge on bat attraction to wind turbines. By observing bat behavior from two different states, the team hopes to add to our understanding of how bats respond to wind turbines and whether they behave differently in different geographic regions.

The Electric Power Research Institute (EPRI) from Washington, D.C. conducts research and development to help address challenges in electricity reliability, efficiency, affordability, health, safety and the environment. The EPRI team will investigate whether bats prefer the calmer air directly behind wind turbines or the turbulent air surrounding them. The team will use thermal video cameras at a wind energy site in Iowa to record bat movements near wind turbines and tall trees. By comparing the three-dimensional bat movement patterns with modeled airflow patterns and by assessing whether bat behavior at wind turbines is similar to that at tall trees, the EPRI team aims to determine whether better understanding airflow around turbines can help us deter bats from approaching them.

Stantec Consulting Services Inc., a consulting company from Topsham, Maine whose portfolio includes environmental sciences of facilities projects, and Wildlife Imaging Systems will investigate where and how bats use the airspace near the rotor-swept area (where the blades of a wind turbine spin). The team will pair ground-mounted thermal video cameras with acoustic detectors mounted on turbines at wind power plants in Maine and Missouri. At both locations, the team will record bat acoustic activity at various heights on the turbines and sections of the rotor-swept area, accounting for the ways habitat, season, turbine operations, and weather may influence bat activity. Stantec’s team aims to assess differences between technologies, specifically acoustic detectors and cameras, to monitor bats and determine the factors that influence the different species’ behavior.

The awardees will provide regular reports throughout the projects on their progress and findings as well as at the end of the two-year study period. The findings will be made publicly accessible through scientific publications. The teams will also discuss their work via virtual webinars that will be made available to the public and shared on NREL’s wind energy website. 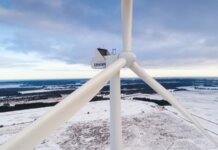