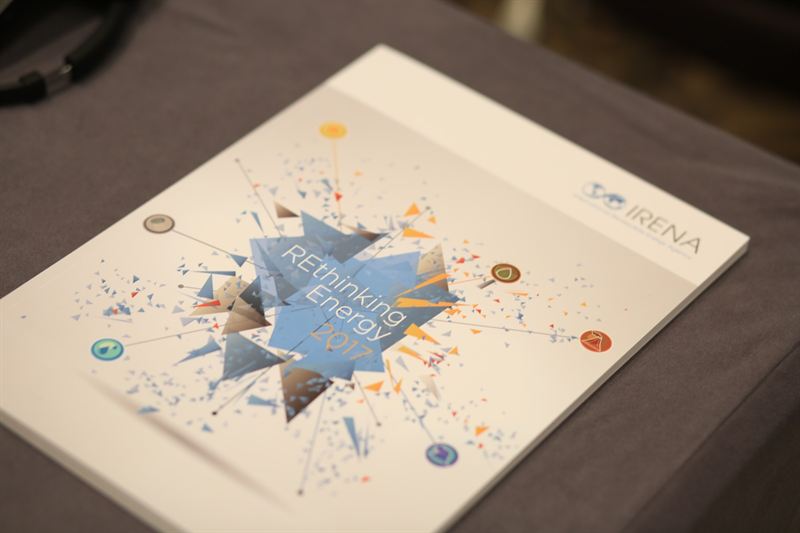 “Renewables are gaining ground by nearly every measure,” states Adnan Z. Amin, IRENA’s director-general. “Accelerating the pace of the energy transition and expanding its scope beyond the power sector will not only reduce carbon emissions – it will improve lives, create jobs, achieve development goals, and ensure a cleaner and more prosperous future.”

The publication – REthinking Energy, now in its third edition – highlights how global investment in renewables has steadily grown for more than a decade: rising from less than $50 billion in 2004 to a record $305 billion in 2015. In turn, countries are making headway to meet international carbon-reduction targets, according to the group.

“As we advance deeper into a new energy paradigm, we need to pick up the pace of our decarbonization efforts,” Amin points out. “Policies and regulations continue to remain crucial to this end and to develop the renewables market. We are seeing more and more countries hold auctions to deploy renewables, and as variable and distributed sources of renewables take on a greater role, regulators have implemented changes to enable grid integration at scale. Heating and cooling and the potential of renewables for transport are areas where future efforts are needed.”

The report also states as follows:

The publication says solar photovoltaics will grow the fastest in terms of capacity and output, and new ways to store electricity will be a game-changer for growing variable renewable energy generation. IRENA estimates that battery storage for electricity could increase from less than 1 GW today to 250 GW by 2030.

In addition, according to the report, off-grid renewables provide electricity to an estimated 90 million people worldwide and enable people to climb the energy ladder.

“Achieving universal electricity access by 2030 will require us to boost global power generation; nearly 60 percent of that will have to come from stand-alone and mini-grid solutions,” continues Amin. “Meeting this aim with off-grid renewables depends on the right combination of policies, financing, technology and institutional capacity. Making needed changes and accelerating deployment will allow countries to address global issues in sustainability, education, gender equality, health, water and food.”

REthinking Energy was released today at IRENA’s seventh assembly, which gathers 75 ministers from over 150 countries to advance the global renewable energy agenda and make concrete steps to accelerate the global energy transformation, the group says.

The full REthinking Energy report can be downloaded here.