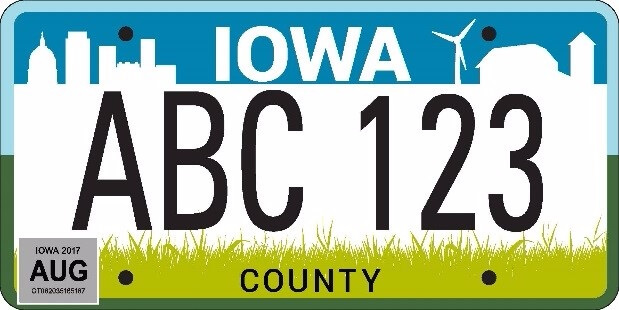 Representing the major wind energy presence in the state, license plates with a wind turbine are coming to Iowa next year.

According to the Iowa Department of Transportation (DOT), Gov. Kim Reynolds, Lt. Gov. Adam Gregg and Iowa DOT Director Mark Lowe revealed three potential plate designs at the start of the Iowa State Fair last month. The public voted for their favorite design through an online poll and at the Iowa DOT’s State Fair booth. In the end, the “City and Country Reboot” design won the public vote with 113,299 of the poll’s 291,095 total votes.

“Iowans made their voices heard in the selection process for our state’s next license plate design,” Reynolds said in a recent press release. “I’m glad so many were able to help select a meaningful design that should serve as a point of pride for our state and showcase our unique culture to the rest of the country.”

Iowa leads the country in terms of the percentage of electricity the state obtains from wind. According to a report issued earlier this year, more than 17,000 wind-related jobs could be in Iowa by 2020.

The new plate design will be available sometime in 2018, says the DOT.