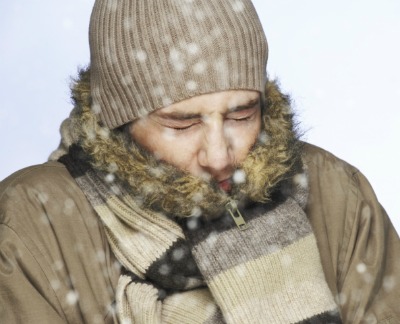 For the second time in just over three years, a major weather event (the so-called polar vortex) has generated significant profits for generators, particularly in the eastern and southern U.S. Wholesale power price increases were caused by many factors, notably high and fluctuating delivered natural gas pricing, generation supply shortages, and differing market structures. Changing weather patterns will accelerate the number and size of these opportunities for investors who understand the relationships among these factors.

These weather patterns are also revealing potential reliability risks to the current grid. To the outside observer, the grid performed adequately during the polar vortex. But a more detailed look shows that grid reliability is a growing problem in many areas. Resource levels and mix, market structure, and seasonal resource participation are creating inadvertent consequences that may undermine grid reliability. The shortages highlight the need for a forensic review of the regulatory structures to ensure reliable power grids and appropriate price signals and the potential need for new reliability-driven investments.

Daily average power prices fluctuated wildly from $40/MWh to nearly $800/MWh over this period. Prices spiked on Jan. 6 in ERCOT and on Jan. 7 in most other markets in the U.S. Natural gas prices ranged from $4/MMBtu to $40/MMBtu (Figures 1 and 2). 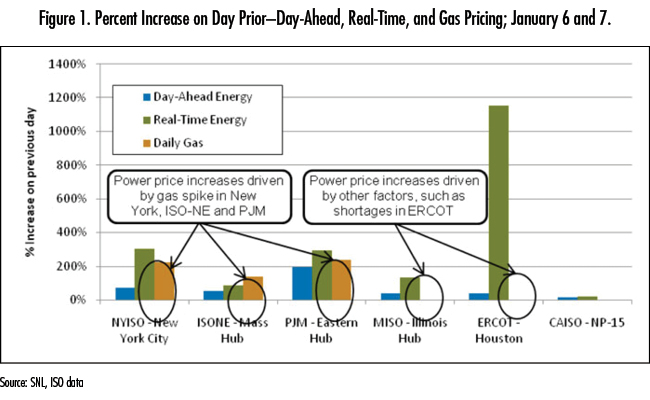 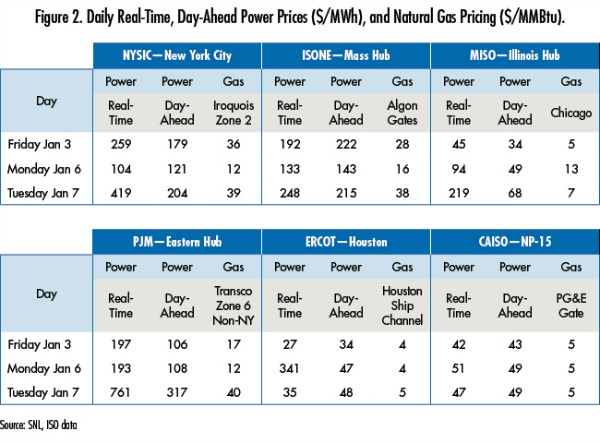 Natural gas prices in New England and eastern New York reached record highs on Jan. 7, with midpoint prices ranging from $35/ MMBtuÂ and $40/MMBtu and bids as high as $100/MMBtu. While there are unconfirmed reports of some wellhead freeze-off in the Marcellus area and the Texas Eastern Transmission compressor station in Pennsylvania was out of service for a portion of the day, there appear to have been no major gas supply disruptions during the cold snap; in other words, the high prices at New England and eastern New York hubs were due to high demand and pipeline constraints, not an interruption of upstream gas supplies. 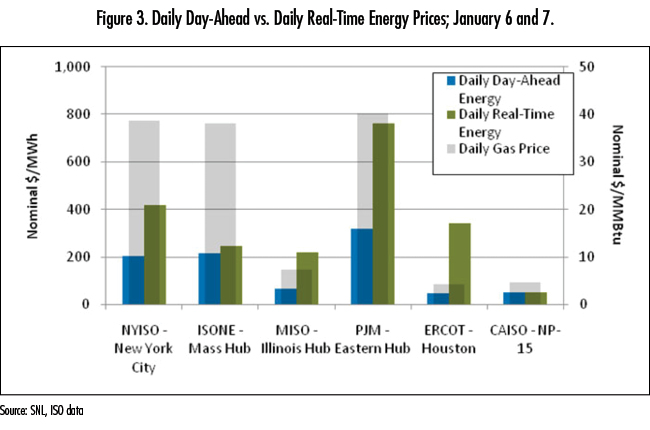 The highest prices in the U.S. occurred in the ERCOT region. This market has had low reserve margins relative to other markets and concerns about resource adequacy since 2011.

Generally, many Independent System Operators (ISOs) experienced high levels of forced outages on Jan. 6 and 7 (Figure 4). Additionally, winter peak demand hit records or near-records in all eastern ISOs. Many ISOs were forced to issue emergency alerts and call reserves or reduce voltage. This raises the question as to whether the system operated reasonably well under extreme circumstances or, alternatively, whether changes in the resource mix with coal retirements, increased reliance on natural gas, increased reliance on summer-only resources (notably demand resources, but also increasingly generation), and increased penetration of intermittent supply, combined with market structure changes, may be inadvertently compromising grid reliability and/or resulting in very high prices that might be avoided. We believe this question can be answered only with detailed forensic evaluation, and this activity should be undertaken in the near-term. 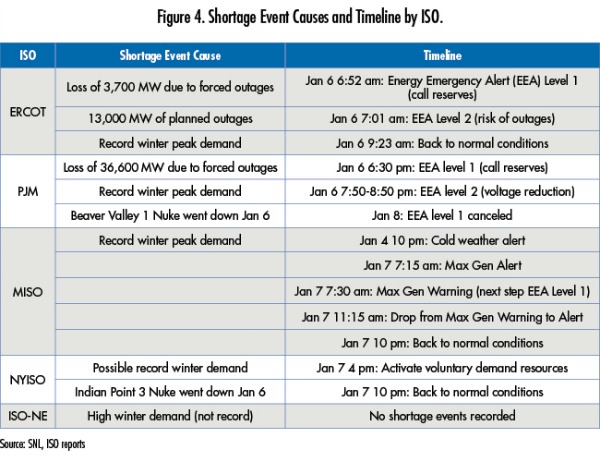 The electricity price caps in the U.S. vary depending on the Regional Transmission Organization (RTO) and the regulator. The highest $/MWh prices occurred in ERCOT, which is regulated by the Public Utility Commission of Texas and not the Federal Energy Regulatory Commission (FERC) with respect to price caps (Figure 5). ERCOT has a $5,000/MWh price cap, the highest established thus far in North America. This cap will increase to $9,000/MWh by 2015. In contrast, the price cap in PJM, the nation's largest RTO, is $1,800/MWh (excluding congestion).Thus, it is not surprising that during shortages of generation capacity – e.g., periods when insufficient operating reserves were available – prices would be higher in ERCOT than in PJM. The differences in price caps relate to difference in market structure: ERCOT does not have a capacity market, while PJM does. 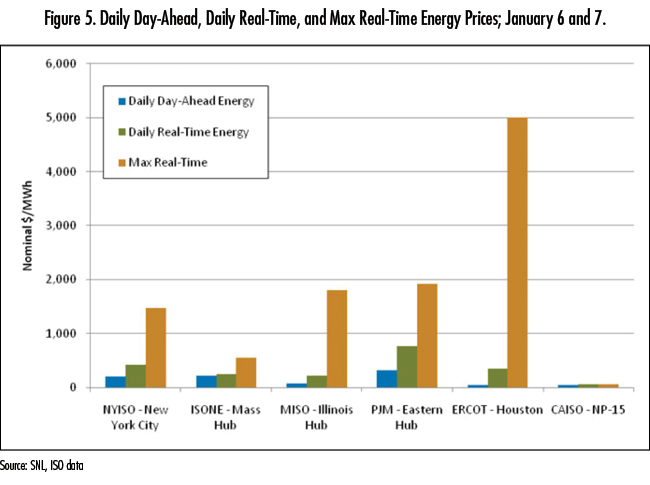 Predictability of the Problems

We and others have identified ISO New England (ISO-NE) as having insufficient gas delivery capacity to avoid high prices for gas and, hence, power, especially during colder-than-normal weather conditions. Therefore, ISO-NE's price explosion was the most predictable in the country, and it has been possible to anticipate and structure business activities around this opportunity. Indeed, for the winter season, ISO-NE's delivered gas prices have been high on many occasions, even before this most recent cold snap.

FERC and NERC Treatment of Reliability

Most reliability activities in the power sector are focused on maintaining grid reliability during the summer peak. This is because summer peak demand in the U.S. has historically been higher than winter peak demand. In addition, there has been a trend to rely on summer-only resources. Reliability during the winter peak is, however, extremely critical in order to maintain home heating and public health and safety. This, combined with the recent cold snap, should lead to a review of the robustness of reliability rules in light of the actual experience of winter 2014.