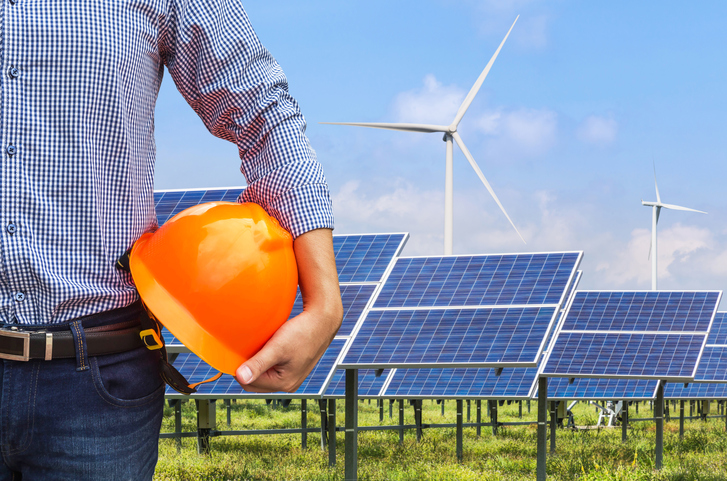 Changes in America’s energy profile are affecting national employment in key sectors of the economy, explains a new report from the U.S. Department of Energy (DOE). In particular, wind and solar added 25,000 and 73,000 new jobs, respectively, last year, says the agency.

According to the DOE’s second annual report tracking these employment trends, 6.4 million Americans now work in the “traditional energy and energy efficiency industries,” which added over 300,000 net new jobs in 2016 – representing 14% of the nation’s job growth. The report describes “traditional energy” jobs as those in “electric power generation and fuels” and “transmission, distribution and storage,” both of which include include “fossil, nuclear, and renewable energy sources and their value chains,” the report explains. In addition, “energy efficiency” jobs are described as those covering the “production of energy-saving products and the provision of services that reduce end-use energy consumption.” The report notes that energy efficiency jobs increased by 133,000 jobs for a total of 2.2 million.

The agency says its “2017 U.S. Energy and Employment Report (USEER)” uses information from surveys to over 30,000 employees in energy sectors and tracks “dramatic growth” in several key sectors of the U.S. economy in 2016. The report also uses secondary data from the U.S. Department of Labor.

For wind power specifically, the industry employs a total of 101,738 workers, which represents a 32% increase since 2015, the report says. The largest share of wind employment lies in construction, which accounts for 37% of the workforce. Manufacturing and wholesale trade follow at 29% and 14%, respectively.

For solar, the report says U.S. Department of Labor data does not adequately capture the true employment numbers: The data “dramatically underestimates” how many workers are employed in the solar sector, which, the DOE report says, includes 373,807 Americans who “spend some portion of their time working to install, distribute or provide professional services to solar technologies.” Like wind, construction/installation represents the biggest employment share, followed by “wholesale trade, manufacturing and professional services.”

“This report verifies the dynamic role that our energy technologies and infrastructure play in a 21st-century economy,” says David Foster, the DOE’s senior advisor on industrial and economic policy. “Whether producing natural gas or solar power at increasingly lower prices or reducing our consumption of energy through smart grids and fuel-efficient vehicles, energy innovation is proving itself as the important driver of economic growth in America, producing 14 percent of the new jobs in 2016.”

USEER examines four sectors of the economy – electric power generation and fuels; transmission, wholesale distribution and storage; energy efficiency; and motor vehicles – which cumulatively account for almost all of the U.S.’ energy production and distribution system and roughly 70% of U.S. energy consumption, according to the DOE.

By looking at such a wide portion of the energy economy, the agency says, USEER can provide the public and policymakers with a clearer picture of how changes in energy technology, systems and usage are affecting the economy and creating or displacing jobs.

Of the 1.9 million workers in electric power generation and fuels, 800,000 employees contribute to the production of low-carbon electricity, including renewable energy, nuclear energy and low-emission natural gas, the report says.

In addition, in an analysis of the 2.4 million employees in the motor vehicles industry, the USEER identified 259,000 jobs supported by alternative fuels vehicles – representing an increase of 69,000 during 2016.

Yet, even as the report found the opportunity for job growth in many energy sectors, 73% of all employers surveyed found it “difficult or very difficult” to hire new employees with needed skills. However, this represented a slight increase in hiring difficulty over the previous year, according to the DOE.

The USEER also provides individual state energy and employment profiles. The state reports highlight the growth and loss of jobs in particular energy sectors across the country and will provide a tool for state energy offices and economic development agencies, says the DOE, adding that state profiles demonstrate the unevenness of growth in new energy technologies. For instance, 41% of all solar jobs are in California, while 24% of all wind jobs are in Texas.

“We welcome this important resource for understanding the growth of jobs in advanced energy,” says Malcolm Woolf, senior vice president of policy for Advanced Energy Economy, a national business association. “Last year, DOE’s data showed that advanced energy technologies and services supported more than 2.5 million U.S. jobs in 2015 – more than mining and natural resources and equal to supermarkets and grocery stores. We look forward to reviewing the new report, which will allow us to determine the employment impact of our growing industry.”