The company, including subsidiaries Maui Electric and Hawaii Electric Light, provides power to 95% of residents on five of Hawaii’s six main islands.

Importantly, Hawaiian Electric reached a milestone last year when 26% of the electricity used by its customers came from renewable energy – up from 23% the year before.

Many of Hawaiian Electric’s ambitious clean energy goals are described in its Power Supply Improvement Plan, which was submitted to the Public Utilities Commission in December. The plan calls for reducing operations that use fossil fuels, doubling the number of private rooftop solar systems and aggressively seeking grid-scale renewable resources, among other goals.

In other emissions-reducing milestones, the number of registered plug-in electric vehicles (EVs) has broken the 5,000 mark in the state – making Hawaii second in the nation after California in EVs per capita, according to Hawaiian Electric. 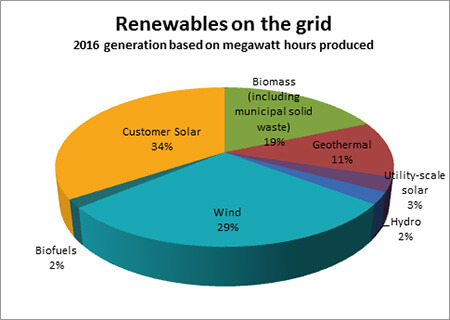 There is the Puna Geothermal Venture 38 MW power plant on the Big Island. It’s operational history has been fraught with technical problems, cave-ins, and toxic H2S hydrogen sulfide releases.

Why doesn’t Hawaii use Geo-Thermal?

What with the Big Island being active and the entire chain being upthrusts, could they drill down a bit,
run some cold seawater into wells, then use the ocean to generate power?

Even if only the Big Island can be used, they could generate DC and send that power
around to the other islands.

Apparently they haven’t really looked at this in a while, seems like
The Big island should be all Geothermal, wind, solar and the smaller islands should be
aiming to get as much solar and wind as possible.