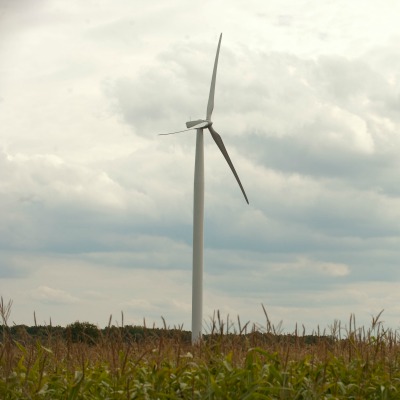 Detroit-based utility DTE Energy has ceased work on its 112 MW Echo Wind Park after a blade from a GE 1.6-100 turbine broke off last Thursday. A similar incident involving the same turbine model occurred at DTE's Thumb Wind Park in March.

Altogether, DTE Energy owns and operates three wind parks in Michigan, and the utility has about 800 MW of wind online or under contract. Scott Simons, a DTE Energy spokesperson, says construction and generation at the Echo Wind Park had been running smoothly last week before the company's second blade break of the year.

At the Huron County site, project workers have so far erected – and commissioned along the way – 59 of Echo's 70 GE wind turbines. According to Simons, GE was performing a six-hour reliability test on the 60th unit when the machine's 48.7-meter blade fell to the ground. He says there were no injuries, other than to the turbine itself; half of the blade was found at the base.

Following the incident, DTE has halted construction of the remaining 10 turbines and shut down the entire wind park.

"We have ceased all work and operation on the project until we're satisfied with what the root cause is and that it doesn't pose a danger of any continued blade failure," Simons explains. "We're working with GE to determine the root cause. It's still under investigation."

A spokesperson for GE, Lindsay Theile, says, "It's our goal to resolve this and bring the turbine back online as soon as possible. We're focused on the issue at hand."

Nevertheless, this represents a setback for the Echo project. The entire park was scheduled to be online by the end of this month. "That's not going to happen anymore," Simons notes. He adds that the turbines are under warranty but it is too early to determine the full impact of the shutdown, financial or otherwise.Â

DTE Energy and GE have worked together on this issue before. In March, a blade broke off of another 1.6-100 turbine at the utility's already-operating Thumb Wind Park. The 110 MW project, spread across three townships, reached commercial operation late last year.

According to Simons, DTE followed a process similar to the one it is taking now, having stopped operation at Thumb Wind until the issue was addressed.

"Regarding that incident," GE's Theile says, "we completed an investigation in cooperation with DTE and determined the cause to be an isolated supplier manufacturing defect. The issue has been addressed with the supplier, and the blade has been replaced."

As to whether this second incident has the same root cause, neither Simons nor Theile is willing to speculate.

"We were assured and satisfied that the Thumb Wind Park was an isolated incident and it was safe to proceed, so we'll see what this [new] investigation brings," says Simons. Once the probe is complete, he adds, DTE will take steps accordingly.

Theile admits GE is unable to provide much comment during the ongoing investigation, but she notes that although blade breaks are rare in the wind industry, they do happen. Nonetheless, "The quality and availability of our wind turbines in the field is of utmost importance to us, and as always, if there are any issues, we will work with our customers to address them."

Dan Shreve, a partner at MAKE Consulting, says he is currently not aware of any other blade issues with the GE 1.6-100 and anticipates the DTE incidents will be handled well.

"GE's 1.6-100 is one of North America's most sought-after turbines, and I expect that GE will resolve this issue in the same way Siemens addressed its turbine-blade issues earlier this year," he says, alluding to adhesive-bonding problems Siemens faced with its B53 rotor blades.

"I do not expect any long-term repercussions on [1.6-100] turbine sales unless this most recent blade break has a fundamentally different root cause than the previous manufacturing defect," Shreve concludes.Â

Photo caption: One of the completed GE 1.6-100 wind turbines at the Echo Wind Park. Photo courtesy of DTE Energy.