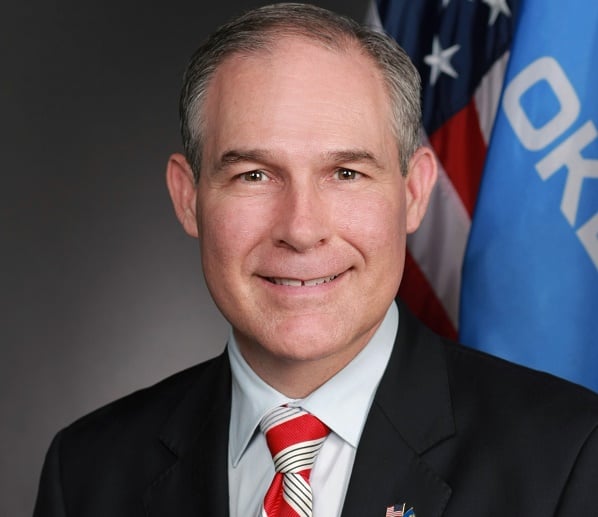 Much to the dismay of many environmental advocacy groups, Scott Pruitt was officially sworn in as the 14th administrator of the U.S. Environmental Protection Agency (EPA) on Friday. Pruitt succeeds Gina McCarthy, who President Barack Obama named EPA head in 2013.

However, according to his former biography on the state of Oklahoma’s official website, Pruitt is a “leading advocate against the EPA’s activist agenda.” In 2015, he joined a multi-state lawsuit against the EPA in an ongoing effort to block the Obama administration’s Clean Power Plan. Last year, he and another attorney general also penned an article in the National Review that stated the debate over global warming is “far from settled.”

“Based on his record of putting polluter profits before people, Pruitt will undoubtedly be the most dangerous EPA administrator in history,” Hooks claims.

“While attorney general, Pruitt sued EPA more than a dozen times – most often in an effort to stop EPA from cleaning up the air and water in our communities,” he continues. “Placing an active enemy of environmental protection in charge of the Environmental Protection Agency is mind-boggling.”

Likewise, Michael Brune, executive director of the Sierra Club, says in a statement, “We are deeply disappointed in the senators who backed Pruitt. They are elected to represent their constituents’ best interests but instead voted to protect corporate greed.”

Jay Ashcroft, Missouri Secretary of State, says in a press release from the EPA that Pruitt, an “expert on regulatory and constitutional law,” will provide a “necessary balance” for the agency.

“He recognizes that a clean environment and a vibrant economy do not have to be mutually exclusive. As Oklahoma attorney general, he has repeatedly taken on the tough fights to stop the regulatory overreach of the past decade.”

“He understands that we can protect our environment with common-sense policies that don’t attack job creators and send thousands of workers, like West Virginia’s coal miners, to the unemployment line. In Oklahoma, Mr. Pruitt tirelessly fought unwarranted regulations and federal government abuse. I am confident he will bring a pragmatic and balanced approach to the EPA by returning it to its original and lawful mission.”

On the other hand, California Senate President Kevin de León, D-Los Angeles, says in a release that “California will not follow Trump’s destructive path.”

“We’ve proven that you can protect the environment and grow jobs. We’ve delinked economic growth from greenhouse-gas emissions and helped turn clean energy into a pillar of our economy that now supports over half a million jobs in our state,” he says.

Expressing her “extreme disappointment” for the EPA nomination, Margie Alt, Environment America’s executive director, says in a statement, “Americans deserve an EPA administrator who will fight to protect the air we breathe, the water we drink and the planet we love. Scott Pruitt fails on all these accounts.”

The Sierra Club’s Brune adds that the group and its “2.7 million members and supporters will continue to mobilize and resist this corrupt administration’s attacks on public health, clean air and clean water every step of the way.”

On Friday, the EPA tweeted for the first time since before President Donald Trump’s inauguration last month:

We’d like to congratulate Mr. Pruitt on his confirmation! We look forward to welcoming him to EPA.