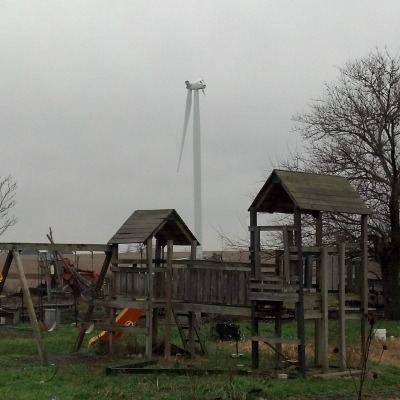 GE has begun investigating another blade break involving its 1.6-100 turbine and 48.7-meter blade, this time at Invenergy's California Ridge wind farm in Illinois. In addition, the turbine manufacturer says it has notified a group of customers that might have affected blades.

According to Chicago-based Invenergy, the latest incident occurred at its California Ridge project on the night of Nov. 20. This follows a previous blade break that happened three days earlier at the developer's 94 MW Orangeville project in New York and two recent incidents at DTE Energy wind farms in Michigan.

Invenergy's 217.1 MW California Ridge project, which entered operation last year, features 134 GE 1.6-100 turbines. The developer says the blade broke and fell at the base of the project's 134th unit.

"We believe that as this blade fell, it hit a second blade on the same turbine, causing that second blade also to break off and fall to the ground near the base," the company says in a statement. "As designed, the turbine automatically ceased operation. No one was injured."

As it turns out, this is not the first blade break at the California Ridge wind farm; Invenergy verifies that one occurred in November 2012.

GE is in the process of investigating the new incidents at Invenergy's California Ridge and Orangeville projects, as well as at DTE Energy's 12 MW Echo Wind Park. Theile says she cannot publicly disclose much detail at this time, but GE has also identified a "suspect population" of 48.7-meter blades and contacted other potentially affected customers.

"We are still going through the root cause analyses, which take time, but our teams have been able to identify the population of blades that could have similarities to what we've seen," she says. Theile also notes that GE's 48.7-meter blades are on various turbine models, though the majority of them are featured on the 1.6-100 machines.

Overall, Theile explains GE's so-called suspect population represents about 1.5% of its total blades in the company's wind turbine fleet of more than 22,000. "It's a very small portion of our blades in the grand scheme of things."

"We have notified those customers with turbines within this population and are closely working with them to keep their turbines running reliably and safely," she says. GE is focused on answering the customers' questions and providing detailed updates on the company's ongoing investigations.

"We're sharing with our customers because it's their fleet and their operations," Theile says. However, she notes GE will not likely make much more information publicly available until the root cause analyses are thoroughly complete.