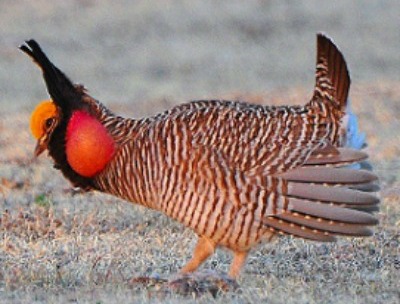 In response to a precipitous decline of the lesser prairie-chicken (LPC), the U.S. Fish and Wildlife Service (FWS) announced on March 27 that it is listing the species as threatened under the Endangered Species Act (ESA). Under the ESA, a ‘threatened’ designation means the species is likely to become in danger of extinction within the foreseeable future. Threatened-species status represents a step below ‘endangered’ and, as such, carries fewer restrictions.

Nevertheless, the listing of any species under the ESA has immediate and long-term implications for both energy and agriculture interests. And because the LPC resides in the wind-rich lands of Colorado, Kansas, New Mexico, Oklahoma and Texas, rest assured that listing will impact wind developers now and until the species recovers and is de-listed or it goes extinct.

Why the fuss?
According to FWS Director Dan Ashe, "The lesser prairie-chicken is in dire straits." Last year, the range-wide population declined to a record low of 17,616 birds, an almost 50% reduction from the 2012 population estimate. This once-abundant relative of the greater prairie-chicken, greater sage-grouse (GHG) and other "prairie grouse" species has been reduced by an estimated 84-90% from its historical levels as a result of the human-induced degradation of its preferred habitat. And with land-use pressure from energy development, and agriculture and urbanization on the increase in the West, the prognosis for LPC remains bleak.

Historically, LPC were common in sand sagebrush-bluestem and within shinnery oak-bluestem vegetation types. Currently, LPC are most common in dwarf shrub and mixed grasses on sandy soils, as well as in short-grass or mixed-grass habitats on loamy or clayey soils. In Colorado and Kansas, LPC are typically restricted to sand sagebrush communities dominated by sand dropseed, side oats grama and blue grama. Recently in the northern fringe of its range, LPC have moved into mixed-grass prairie and Conservation Reserve Program (CRP) fields. And although all these vegetation elements are important to LPC, the thing they need more of than almost anything else is what is increasingly in short supply – large and contiguous expanses of undisturbed habitat. In order for LPC to sustain viable populations, it is estimated they need contiguous units of their preferred habitat that are a minimum of 25,000-50,000 acres in area, or coincidentally, about the size of an average wind farm in the Great Plains. A century ago, the heath hen, a New England relative of the LPC, went extinct due to similar cumulative impacts resulting from destruction of its preferred habitat.

As early as next year, this same ESA-listing scenario may play out with another increasingly rare western bird, the greater sage-grouse (GSG). However, the impact of that listing will be even more far reaching because GSG will be listed as an endangered species, as opposed to threatened species for LPC. Also, GSG and their preferred habitats are found in 11 states, as opposed to five states for LPC.

Death from above
While habitat quality and habitat size are critical, LPC live in such mortal fear of being preyed upon by hawks and eagles that they will abandon otherwise-suitable habitat simply because it contains an elevated perch that a bird of prey may someday land on and hunt from. This means that vertical structures of almost any kind, be it a wind turbine or telecommunication tower, will render otherwise-suitable habitat unusable by LPC. Studies have indicated that LPC habitat is also degraded by proximity to roadways, buildings, and oil and gas fields.

These large buffers were derived from careful scientific study of the observed responses of LPC to these various land-use features. The proposed buffers are particularly large for wind farms and telecommunication towers because studies showed that LPC were particularly sensitive to them. These 3,000-foot buffers will invariably result in fewer turbines and tall towers in areas that also host LPC populations or their preferred habitat.

Reducing the impact to wind developers
Due to a special deal struck in 2013 (under section 4(d) of the ESA), the regulatory impact to wind power companies from formal ESA listing will be somewhat less than it would have been otherwise. Yet, by no means will it be "business as usual" for wind power in any of the states that host remaining populations of LPC. Specifically, the special 4(d) rule will allow the five states to continue to manage conservation efforts for the species under the Western Association of Fish and Wildlife Agencies' (WAFWA) range-wide conservation plan.Â Â

The WAFWA conservation plan was developed by a consortium of experts from all five states and with input from a wide range of stakeholders. Regarding the special 4(d) WAFWA deal, Ashe said, "Working through the WAFWA range-wide conservation plan, the states remain in the driver's seat for managing the species – more than has ever been done before – and participating landowners and developers are not impacted with additional regulatory requirements. We expect these plans to work for business, landowners and the conservation of prairie-chickens."

Credits for the good, debits for the bad
Under the WAFWA Mitigation Framework, a metric system of debits and credits has been established whereby land-use actions that result in an impact to LPC and their habitats will generate debits, whereas land-use practices that result in impact avoidance or improvements to LPC habitat will generate WAFWA credits. In doing so, WAFWA is providing opportunities for both the exchange and conservation banking of debits and credits.Â

The bottom line
The listing of the LPC as a threatened species is the inevitable result of a century or more of cumulative human impacts. Therefore, wind companies considering developing or investing in any project site that may support LPC or LPC-preferred habitat are advised to conduct all requested pre-construction site assessments, perform all post-construction monitoring, report any bird fatalities to FWS as required by law, and proactively engage in the WAFWA Mitigation Framework. It is particularly vital to hire certified ecologists who know LPC ecology, have worked in the states where LPC reside, and are intimately familiar with endangered species biology, WAFWA and the ESA.Â

Dr. Richard H. Podolsky is a certified senior ecologist who specializes in endangered species biology and is CEO of Avian Systems, a biological consulting firm that conducts bird and bat surveys. Podolsky can be reached at podolsky@att.net or (207) 475-5555.