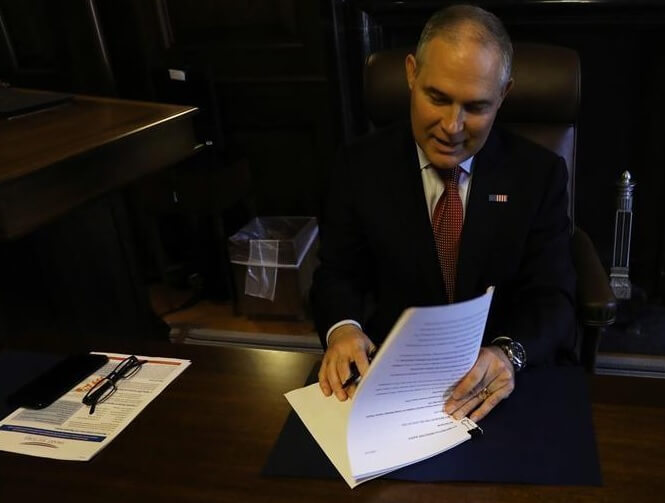 As expected, the head of the U.S. Environmental Protection Agency (EPA), Scott Pruitt, has issued a proposal to repeal the Obama administration’s Clean Power Plan (CPP). The notice of proposed rulemaking (NPRM) comes roughly six months after President Donald Trump served up an executive order on “energy independence,” which focused on abolishing the CPP and called for Pruitt to “review” the climate change initiative.

Back in March, Trump told the EPA to “suspend, revise or rescind four actions related to the Clean Power Plan that would stifle the American energy industry.” Citing the National Mining Association, for example, the White House said the CPP would decrease coal production by 242 million tons.

The CPP – which has already been met with its share of opposition and lawsuits since it was rolled out – calls for reducing carbon emissions from the U.S. power sector 32% below 2005 levels by 2030. To do so, the plan calls for, among other initiatives, phasing out coal plants with clean energy sources such as wind and solar power.

Now, following its review of the CPP, the EPA has decided that “the Obama-era regulation exceeds the agency’s statutory authority.”

“Repealing the CPP will also facilitate the development of U.S. energy resources and reduce unnecessary regulatory burdens associated with the development of those resources, in keeping with the principles established in President Trump’s Executive Order on Energy Independence,” the agency says in a press release.

The EPA claims the CPP was “premised on a novel and expansive view of agency authority that the Trump administration now proposes to determine is inconsistent with the Clean Air Act.” The agency also brings up the U.S. Supreme Court’s stay of the CPP in February of last year.

“The Obama administration pushed the bounds of their authority so far with the CPP that the Supreme Court issued a historic stay of the rule, preventing its devastating effects to be imposed on the American people while the rule is being challenged in court,” Pruitt says in the release. “We are committed to righting the wrongs of the Obama administration by cleaning the regulatory slate. Any replacement rule will be done carefully, properly and with humility by listening to all those affected by the rule.”

According to the agency, the NPRM offers an “updated analysis on the environmental, health and economic benefits” of the proposed repeal, which could “provide up to $33 billion in avoided compliance costs in 2030.” The EPA claims the Obama administration’s estimates on the CPP’s benefits were “highly uncertain and/or controversial” and argues the administration is guilty of doing as follows:

“EPA will respect the limits of statutory authority,” Pruitt adds in the release. “The CPP ignored states’ concerns and eroded long-standing and important partnerships that are a necessary part of achieving positive environmental outcomes. We can now assess whether further regulatory action is warranted and, if so, what is the most appropriate path forward, consistent with the Clean Air Act and principles of cooperative federalism.”

Notably, according to a report from The Hill, Pruitt is also taking a jab at federal tax credits for wind and solar. At a Kentucky Farm Bureau event on Monday, he reportedly said he would “do away” with the tax incentives and “let [renewables] stand on their own and compete against coal and natural gas and other sources.”

In response, Jodie Van Horn, director of the Sierra Club’s Ready for 100 Campaign, says in a statement, “Scott Pruitt is once again trying to stack the deck to prop up his dirty fossil fuel accomplices, who have been subsidized for decades at the expense of our children’s health. For nine months, he’s been rigging the system to help corporate polluters, and this proposal is more of the same.”

She adds, however, that “cutting support for clean energy” would be the decision of Congress, not the EPA. In July, U.S. Sen. Chuck Grassley, R-Iowa – commonly known as the “father” of the wind production tax credit (PTC) – reiterated his unwavering support for the PTC and noted he is “in a strong position” in the U.S. Senate to keep defending the tax credits and their scheduled phase-out. The senator also reminded the wind industry of his support today on Twitter:

I’m mtg w/Pruitt next week. I will remind him wind ptc phaseout will stay on books until 2020, like Congress planned

The EPA says it has sent its NPRM to the Federal Register; after it’s published, there will be a 60-day public comment period.

“With this action, the Trump administration is respecting states’ role and reinstating transparency into how we protect our environment,” Pruitt adds.

However, according to Richard Eidlin, vice president of policy and co-founder of the American Sustainable Business Council, the CPP did, indeed, offer states “extensive flexibility in meeting their carbon-reduction targets and was supported by many business organizations from all industrial sectors.”

In a statement, Eidlin, noting that it’s “past time to regulate carbon emissions,” brings up that the Supreme Court already decided “several years ago” that the EPA, under the Clean Air Act, does have the authority to regulate emissions “and thus coal.”

“In contrast to Pruitt’s claim that the CPP chose ‘winners and losers,’ it’s this administration that is following that approach by ignoring the many promising low-carbon energy technologies produced in our country,” he adds.

Photo courtesy of the EPA