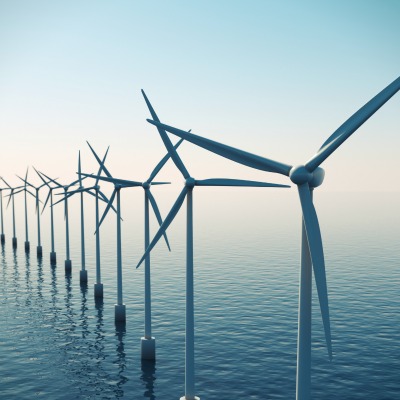 At long last, the U.S. offshore wind industry is showing real progress toward putting steel in the water. The offshore sector is progressing not only with key projects like Cape Wind and the Block Island wind farm, but also more broadly as the federal government provides new grants and works with coastal states to offer large leases for future offshore development.

As of the end of July, the developer behind the 468 MW Cape Wind project had secured close to two-thirds of the approximately $2.5 billion needed for the wind farm, to be located off the coast of Cape Cod, Mass. In addition, the developer sold more than 77% of the projected output (363 MW) through stable, 20-year power purchase agreements (PPAs) at $0.187/kWh plus inflation.

Deepwater Wind's more modest 30 MW wind plant, located off the Rhode Island coast, has its entire output secured with a 15-year PPA at $0.244/kWh. It also has contracts for turbines from Alstom and an installation vessel from Fred Olsen Windcarrier, and continues to move through final regulatory hurdles, including receiving state approvals for its transmission system.

Construction of both projects is planned to commence in 2015.

This year saw the U.S. Department of Energy's (DOE) offshore wind demonstration projects secure substantial funding. Fisherman's Energy landed two grants of $6.7 million for final engineering and $40 million for construction of a 25 MW wind plant off Atlantic City, N.J. – although the project is mired in a dispute with the New Jersey Board of Public Utilities, which administers an important offshore wind renewable energy credit program that may be necessary to obtain financing for construction of the project. Dominion Virginia Power secured a similar rate of $46.7 million for two 6 MW turbines to be installed off Virginia Beach, Va., on novel twisted jacket foundations derived from the offshore oil industry.Â

After the storm
Another unusual project, proposed by Principle Power and selected for $46.7 million in DOE grants, is slated to have five 6 MW direct-drive turbines on semi-submersible floating foundations assembled near shore and towed to depths of around 1,000 feet off the Oregon coast. The company's previous partnership with big Portuguese developer EDP saw a 2 MW Vestas turbine successfully deployed off Portugal's coast on a floating platform, not long before a major storm brought waves over 60 feet high. The turbine survived, demonstrating that the deepwater development has a real chance at success and that the U.S. West Coast, with its much deeper sea floor, could also accommodate offshore wind.

The pipeline potential being built up through offshore lease signings through a program administered by the federal Bureau of Ocean Energy Management (BOEM) is also an exciting development. Off the coast of Rhode Island and Massachusetts, Deepwater Wind has agreed to pay $3.8 million to develop in an area that could support 3.4 GW of wind. Off the Virginia coast, Dominion won an auction to invest $1.6 million in the phased development of over 2 GW. In Maryland, two lease sites will be auctioned in August that could support up to 2.3 GW. Further auctions for a total of nearly 10 GW of offshore wind capacity have been announced by BOEM for Massachusetts, New Jersey and New York in the coming year.Â

This obvious progress in U.S. offshore wind is garnering headlines beyond the trade presses because offshore wind is still novel in the country. But the revived onshore market is where substantial capacity is again being deployed, despite the boom-and-bust cycles caused by on-and-off-again tax policies.Â

Incentive-dependent
The production tax credit (PTC) and investment tax credit (ITC) are currently expired, yet the wind market is booming, with nearly 100 projects totaling as much as 13 GW in various stages of construction in over 20 states. This is the result of the PTC being extended on Jan. 1, 2013, for one year and special safe-harbor guidance from the Internal Revenue Service (IRS). The guidance allows wind plants that began construction during the extended PTC to qualify, as long as developers either began construction in 2013 – the so-called "physical work test" – or spent at least 5% of the project capital costs that year.

The owners of Cape Wind and the Deepwater Wind Block Island projects have announced compliance with the 5% test for the ITC. Development of more offshore projects will depend on the extension of the ITC and state incentives such as the ocean renewable energy credits or long-term contracts. Onshore projects that meet the physical or 5% test then have two years to come online in order to qualify for the PTC or ITC.
In an ideal scenario, the 13 GW of construction reportedly under way would come online by the end of the two-year window ending Dec. 31, 2015.Â

In Navigant's World Market Update 2013, the report forecasts that around 12 GW of the 13 GW will come online, split roughly between 2014 and 2015. A few items of uncertainty surround this build cycle. More than 9 GW of PPAs have been signed during 2013 and through the first quarter of this year. PPAs in almost all cases are essential for wind plants in the U.S. to secure financing.Â

Extending the wind cycle
That's not to say a further 3 GW to 4 GW of PPAs cannot be signed for this build cycle, but time is running out for turbine purchases that would lead to installation by the end of 2015. Some developers that started construction but did not put down payments on turbines by the end of 2013 may ultimately not secure PPAs, turbines or financing, nor qualify under the IRS safe-harbor stipulations during this build cycle for certain projects.Â

Even if just over 9 GW is commissioned between 2014 and 2015, that still represents a healthy baseline of wind installation. But it shows again the inefficiency of the U.S. system of stop-start development cycles, driven by a Congress that has failed to provide the wind industry with long-term policy stability. The wind industry and its stakeholders are lobbying fiercely for an extension of the credits now, but the more likely scenario for passage is within a broader tax extenders package that stands a better chance of passing in the lame-duck Congressional session after the November elections.Â

One notable upside to the possible passage of the wind tax credits at the end of the year covering 2015 is that they will most likely include the same IRS safe-harbor and start-construction stipulations, which would effectively extend out a two-year build cycle from the end of 2015 into 2016 and 2017. With projects already under way for 2014 and 2015, that could potentially create a four-year build cycle beginning with this year's initial recovery and ending in 2017.Â

Jesse Broehl is senior research analyst at Navigant Research, and Michael Ernst is director of regulatory affairs at Tetra Tech Inc. Broehl can be reached at jesse.broehl@navigant.com, and Ernst can be reached at michael.ernst@tetratech.com.