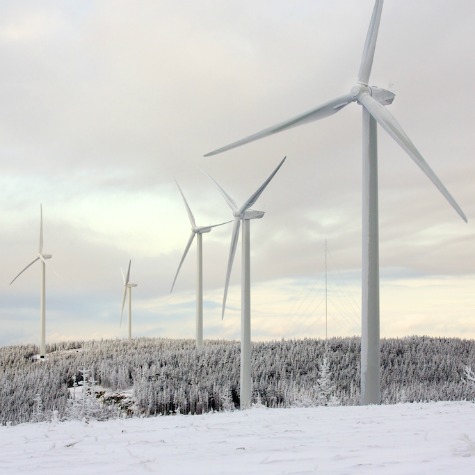 By completing three wind farms in Quebec in the past four months, EDF has provided a much-needed economic boost for the region and its supply-chain partners.

With the commissioning of the company's two most recent Quebec projects – the 150 MW Massif du Sud wind project and the first phase of the 150 MW Lac Alfred wind farm – EDF EN Canada has moved closer to achieving 1 GW of installed capacity by the end of 2015 and, in doing so, helped to boost Quebec's supply chain.

EDF EN Canada, a subsidiary of EDF Energies Nouvelles, says that with a combined investment of nearly C$700 million, the two projects created more than 600 jobs during the construction phase, as well as provides 20 to 30 permanent operations and maintenance positions.

The commissioned projects come on the heels of the October 2012 commissioning of the Saint-Robert-Bellarmin project, an 80 MW wind farm located on the Canadian border between the cities of Lac-Megantic and Saint-Georges-de-Beauce.

EDF EN says Massif du Sud and Lac Alfred represent two of the seven wind energy projects the company was awarded following the 2008 and 2010 calls for power issued by Hydro-Quebec Distribution, which is buying the output from both wind farms under 20-year power purchase agreements (PPAs).

The second PPA requirement relates to Quebec content, which is a function of the overall percentage of project costs that are sourced from within the province. In order to meet this requirement, EDF EN Canada has contracted with a Quebec firm for the design and construction of the balance-of-plant facilities, and wherever possible, the company will source materials for the project from Quebec suppliers.

Thirty percent of turbine costs must also be incurred within the community. In order to comply with Quebec's domestic-content requirements, REpower has partnered with wind tower manufacturer Marmen, based in Matane; LM Wind Power's blade facility, located in Gaspesie; New Richmond-based SEG Woodward, which is providing the controllers; and Coteau-du-Lac-based Technostrobe, a provider of protective lighting systems.

The suppliers are not the only entities that are benefiting from the two projects: The municipalities hosting the projects will receive a combined annual contribution of over C$600,000, according to Alex Couture, EDF EN Canada's project development director.

With more wind farms planned for the region, local-content suppliers will benefit from the increased business, adds EDF spokesperson Daniel Giguere. He explains that the second phase of Lac Alfred – an additional 150 MW – will be commissioned by Dec. 1.

Additionally, the developer is planning a massive C$800 million Quebec wind farm that will have a nameplate capacity nearly equivalent to that of the recently completed wind farms combined. EDF is awaiting final approval from the Quebec government for that project – the 350 MW Riviere du Moulin wind farm, which is planned for a site located 200 km north of Quebec City in Charlevoix and Saguenay territories.

In order to begin the project, EDF EN needs the government to green light the final recommendations made by the environmental minister, who received a ‘positive report’ from BAPE, Quebec's environmental public hearing board, Giguere notes.