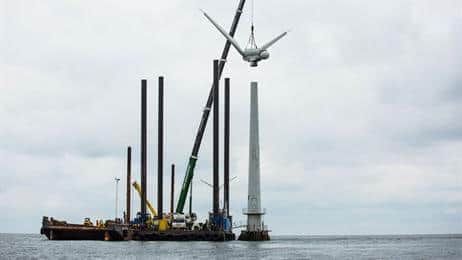 The dismantling process for the world’s first offshore wind farm has now been completed, DONG Energy has announced.

The Vindeby Offshore Wind Farm, located near Lolland in the southeast of Denmark, was constructed in 1991 as a demonstration project to prove whether it was possible to generate clean energy offshore. According to DONG Energy, the project was, indeed, a success, but after more than 25 years of operation, the turbines were worn down, and DONG Energy decided to decommission the project.

In March, contractors commenced dismantling the 11 wind turbines. The blades, nacelles and towers were dismantled and taken down individually by a mobile crane and placed on board a jack-up vessel.

The concrete foundations were broken down on-site mainly by hydraulic demolition shears and a hydraulic hammer, as well as by milling tools that broke down the concrete. The concrete and reinforcement structures were subsequently collected, explains DONG Energy.

“This is the first time we’re dismantling an offshore wind farm, but luckily, we’ve been able to draw on our vast experience from constructing offshore wind farms and working offshore,” says Leif Winther, senior lead business developer for DONG Energy. “In cooperation with the winning contractors, we developed the dismantling method and entered a long process with the authorities to obtain all necessary permits.”

Twenty workers were involved in the process, which took place in periods when the weather permitted offshore work. Water depths of only two to five meters added to the challenging conditions, as only a limited number of vessels were able to work in the area, the company notes.

All wind turbine components and parts from the foundations were shipped to shore in Nyborg Harbour. The components will be reused as much as possible as spare parts for other wind turbines, and some blades will be used for research projects. Components that are not immediately reusable have been transported to a certified recovery company.

“And the tale of the world’s first offshore wind farm off Vindeby on Lolland will be preserved for posterity with one wind turbine from Vindeby Offshore Wind Farm becoming part of the exhibition at the Danish Museum of Energy in Bjerringbro in Jutland,” adds Winther.

During its entire  lifetime, the Vindeby Offshore Wind Farm generated 243 GWh of power. This corresponds to what seven of the largest offshore wind turbines today can generate in a single year – or what DONG Energy’s largest project to date, Hornsea One, can generate in 17 days.