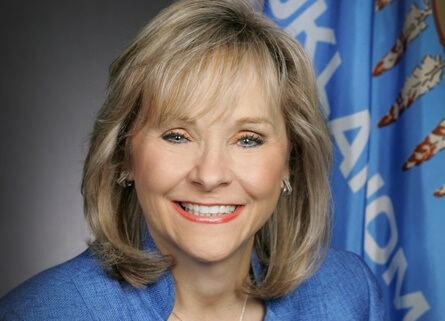 In a not-so-surprising move, Oklahoma Gov. Mary Fallin has signed into law a bill that will end the state’s production tax credits for wind power on July 1 – way sooner than the original sunset date of Jan. 1, 2021.

H.B.2298, which was sponsored by Senate President Pro Tempore Mike Schulz, R-Altus, and House Speaker Charles McCall, R-Atoka, overwhelmingly passed the Oklahoma Senate by a vote of 40-3 last week. The measure, however, was first laid out by the governor herself in a budget proposal earlier this year.

In a statement, Fallin maintains that the tax credits have, indeed, been “key to the growth of wind energy in Oklahoma,” where the industry supplies more than a quarter of the state’s electricity. Specifically, according to recent statistics from the American Wind Energy Association, wind’s share of total power generation in Oklahoma swelled from 18.4% in 2015 to 25.1% in 2016.

However, the Republican governor cites “challenging budgetary circumstances.” Though she notes the importance of the state’s “position as a prominent energy state,” she says it’s “time to ensure that Oklahoma has a bright future.”

Likewise, bill co-author Schulz said in a recent statement, “The zero-emissions tax credit did what it was supposed to do – help the wind industry get off the ground in Oklahoma. Our state ranks third in the nation in terms of wind power and will likely remain among the leaders in wind power for the foreseeable future. The state is facing extraordinary budget challenges, and we can no longer afford the zero-emissions tax credit. This measure provides certainty to the wind industry and stability in the long-term for the state budget.”

Jeffrey Clark, president of The Wind Coalition, notes in a statement that the tax incentives “have helped Oklahoma bring much-needed diversification to its economy.” In addition, he says more than 7,000 residents “rely on wind energy for employment.”

Now, with the signing of H.B.2298, “the final wind energy tax incentive was eliminated.”

“As an industry, we are proud that these incentives worked so well for the benefit of Oklahoma, but we recognize that as an industry matures, incentives should be examined and adjusted to reflect that growth. We hope that other industries will recognize the state’s challenging fiscal situation and follow our lead.

“If it chooses to do so, Oklahoma can be a leader in the energy development that will drive our nation’s economy in the decades ahead,” Clark continues. “That includes natural gas, wind energy, solar power and energy storage.”

He adds, “While the path ahead for Oklahoma remains unclear, we look forward to working with state leaders to help them develop a plan to keep Oklahoma competitive for future investment.”

As pointed out recently by David K. Burton & Binyomin Koff of law firm Mayer Brown, wind farms now must be placed in service before the July 1 sunset in order to still be eligible for the tax incentives. In turn, they said, with such a short deadline, “Oklahoma wind projects that are already in construction – and are relying on the tax credits – may not be able to be placed in operation in time to qualify.”

In response to the newly signed legislation, Burton says, “It is unfortunate that Oklahoma is giving up its position as a leading state for wind-friendly policies. The decision has already caused developers to not site projects in Oklahoma. Future generation of its citizens will regret not having those projects in their state, providing operations and maintenance jobs and paying property taxes to local governments and ground rents to landowners.”