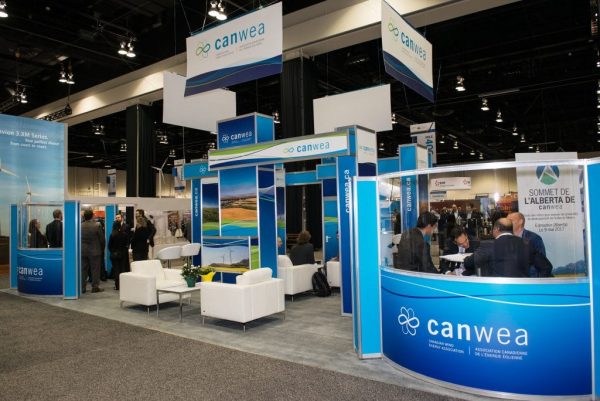 Covering 23,200 square feet of exhibition space at the BMO Center, the event highlighted Alberta’s announcement that the province’s government is initiating a process this month to procure the first 400 MW of 5 GW of new renewable energy. Revealed by Shannon Phillips, Alberta’s minister of environment and parks and the minister responsible for the Climate Change Office, the initiative represents the first step toward meeting the province’s target of 30% renewables by 2030.

Commenting on why CanWEA chose to hold this year’s annual event in Calgary, Robert Hornung, CanWEA’s president, says, “Many new growth opportunities for our industry have emerged in the western provinces. Wind energy represents a massive opportunity for Alberta and Saskatchewan. Capitalizing on the world-class wind resources in the region can help both provinces meet aggressive climate change goals in a cost-effective way. During this year’s conference, industry experts demonstrated how wind energy can help position both Alberta and Saskatchewan for success in the transition to a low-carbon economy.”

Naheed Nenshi, mayor of Calgary, delivered the opening remarks at the conference’s first plenary session, which focused on wind opportunities in western Canada. Highlights included the Alberta government’s plan to support the installation of 5 GW of renewable energy as it works to meet its 30%-by-2030 goal. The plan expects to attract at least C$10.5 billion in new investment and create a minimum of 7,200 new jobs, says CanWEA.

The Saskatchewan government plan expects to target the addition of at least 1.6 GW of wind energy to its electricity supply mix over the next 15 years, says CanWEA.

Also of note, Guy Bruce – vice president of planning, environment and sustainable development at SaskPower – shared that over the next few years, a large number of SaskPower’s generating facilities will reach the end of their life spans. SaskPower expects demand for electricity to continue to grow as the province grows and has set a goal of reducing electricity sector greenhouse emissions 40% below 2005 levels by 2030.

In her keynote address on Wednesday, Catherine McKenna, the federal minister for environment and climate change, stated that 100% of electricity for federal buildings will be powered by renewable energy by 2025. Her overall address focused on her government’s efforts to tackle climate change and the critical role clean energy technologies like wind energy must play. Wednesday’s program also delved deep into the technical, policy and market drivers that are shaping Canada’s evolving energy industry.

Thursday’s conference sessions gave delegates an overview of Alberta’s renewable electricity program principles, objectives and details on the first competitive procurement under the program. CanWEA presented findings from its Pan-Canadian Wind Integration Study, which demonstrated how Canada can get more than one-third of its electricity from wind energy without compromising grid reliability. At the same time, the study showcased how wind energy can dramatically cut emissions, save billions in fossil fuel costs and generate new export opportunities.

Program sessions also featured discussions on Canada’s rapidly expanding wind energy operations and maintenance market. During these sessions, representatives from some of the country’s largest wind farm operators weighed in on strategies to boost efficiency, improve productivity and lower costs.

“We are a longtime CanWEA sponsor and were proud to be the diamond sponsor for this year’s conference,” comments David Estill, sales and strategy manager for the wind power division at Siemens Canada. “Attending CanWEA’s annual event offers us the opportunity to show off the latest Siemens wind energy technology and is a wonderful platform to discuss the future of the wind industry with our community. We found it very convenient that CanWEA chose to hold this year’s event in Alberta and took the opportunity to expand Siemens Canada’s presence in the western provinces.”

CanWEA’s Hornung adds, “CanWEA’s 32nd Annual Conference and Exhibition energized and excited exhibitors and attendees about the opportunities that are emerging as governments, utilities and consumers across Canada recognize that wind energy not only benefits the climate, but makes economic sense, as well.”

CanWEA’s 33rd Annual Conference and Exhibition will be held Oct. 3-5, 2017, at the Palais des congrès de Montréal in Montreal, Quebec.