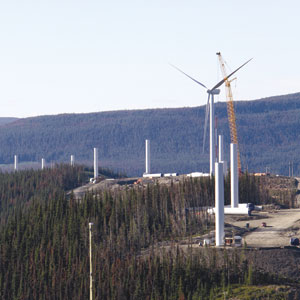 With a strong wind resource and long history of domestic renewable energy, British Columbia has a lot of potential, according to Nicholas Heap, the Canadian Wind Energy Association's (CanWEA) BC regional director. However, the future of wind development in the province may depend on a long list of what-ifs in the coming years.

The latest statistics from CanWEA show BC has four grid-connected wind projects, including the 144 MW Dokie, 102 MW Bear Mountain, 142 MW Quality, and 99 MW Cape Scott wind farms. The latter project most recently came online in late 2013. In addition, there is a single 1.5 MW turbine located at a local ski resort.

Overall, Canada is home to over 180 wind farms totaling almost 7.8 GW of installed capacity. Ontario and Quebec lead the country with close to 2.5 GW online each, followed by Alberta (1.12 GW) and British Columbia (488.7 MW). Here's an interesting fact, though: BC may hold the No. 4 spot, but it also gets less of its domestic electricity supply from wind energy – 2% – than any other Canadian province.

"In large part, that's because we are blessed with a whole bunch of renewable energy resources," explains Heap. "We have lots of large hydro, which has provided cost-effective power for many decades now. We have small run-of-river hydro, biomass, the potential for geothermal – we have a large number of options.

"Up until the last five or six years, those options have been more cost-effective than wind," he admits. Now, Heap says, wind is cheaper than ever because of lower turbine prices and recent technology advances.

"At this point in time, with the cost of wind energy becoming more competitive, wind energy really is in the full position in British Columbia."

Heap says there is potential for BC to add about 200 MW of wind power by 2016, as there are power purchase agreements outstanding from a past call for tenders from Crown-owned utility BC Hydro. Nonetheless, wind development in the province could eventually halt altogether unless changes are made to the utility's new 20-year Integrated Resource Plan (IRP).

The IRP, passed in November 2013, has a strong focus on energy efficiency and is based on what Heap calls an "extraordinarily conservative" load growth forecast. Most importantly, the plan currently features no new wind power goals. "That's obviously disappointing," he says.

The good news is that the IRP is up for review in fall 2015, by which time Heap believes BC's energy demand could rise dramatically, opening the door for more wind procurement. For example, he says BC is one of the fastest-growing parts of Canada whose population is slated to grow by 1 million within the next 20 to 30 years. Simply put: More persons mean more electricity demand.

However, the biggest opportunity for new wind procurement in British Columbia may be natural gas. Re-elected in May 2013, the BC Liberal Party has prioritized establishing a major liquefied natural gas (LNG) export industry, which if realized, would require a significant amount of new electricity to power it.

Heap estimates there are about 11 large LNG projects, if not more, currently in the works. He also says the government has many times emphasized that the LNG should be the "cleanest LNG in the world," with plants powered by clean or renewable resources.

"Obviously, the size of the energy demand coming to the province is very dependent on the number of industrial projects that go forward," Heap notes. "That is a huge variable." Furthermore, it remains uncertain how large of a role, if any, wind power would have in meeting the new electricity needs.

Over the next two years, Heap says CanWEA is dedicated to trying to ensure wind power has a bright future in British Columbia, but he admits that a positive outcome relies heavily on whether BC Hydro sees a need for new energy.Â

"A lot is riding on that [IRP] review," he explains. "We have two years to put a good case forward, and I think we have an excellent case to make. But, at the end of the day, [wind developers] need a customer for their electricity. If the utility in 2015 still decides there is no need to buy electricity, then that's going to have a big impact on the wind energy industry."

There is much work to do, Heap adds. Nevertheless, he says the outlook for BC wind is "very promising."

Photo caption: Construction of the 144 MW Dokie wind farm, which came online in Vancouver, BC, in 2011. Photo courtesy of Alterra Power Corp.