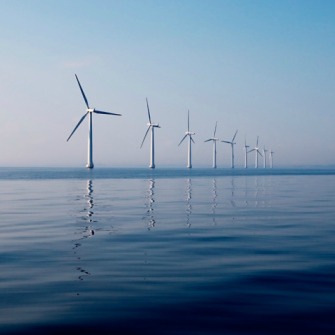 After conducting a comprehensive review of input from stakeholders and the public, the U.S. Department of the Interior (DOI) has announced a major step forward for the development of the Atlantic Wind Connection (AWC), an offshore transmission system proposed for the Mid-Atlantic coast that would allow the integration of up to 7 GW of offshore wind energy onto the power grid.

The DOI on Monday said its Bureau of Ocean Energy Management (BOEM) issued a ‘determination of no competitive interest’ for the AWC, meaning BOEM can grant the developer of the project, Atlantic Grid Holdings LLC, a right of way on the Outer Continental Shelf once the necessary environmental review is complete.

The offshore transmission project – which is backed by Google, Good Energies, Marubeni Corp. and Elia – is envisioned as a high-voltage, direct-current subsea transmission system that would serve as a ‘backbone’ for wind farms that would be built off the coasts of New York, New Jersey, Delaware, Maryland and Virginia.

The 300-mile-long system would be built about 12 to 15 miles off the Mid-Atlantic coast and would take approximately 10 years to complete.

Last year, BOEM initiated a public comment period to determine if there was any competitive interest in the area, and this latest announcement by the DOI confirms that no other developers are vying for the right of way.

In April 2011, Dominion Virginia Power launched a study into what it would take to build a high-voltage undersea transmission line from Virginia Beach into the Atlantic Ocean to support offshore wind projects. At the time, the utility said the study was "the first of many steps, with the ultimate goal being the design, construction, and operation and maintenance of the transmission line."

However, it appears the company has shifted its efforts toward the development of offshore wind farms. Last September, Dominion received a grant from the U.S. Department of Energy to study ways to reduce the cost of offshore wind energy by at least 25%, and in March, the utility expressed interest in developing wind energy facilities in an area about 24 miles off the Virginia coast – an area that, according to the DOI, does not overlap with the right of way sought by the ATC.

In selecting the right of way for the project, the nearly 9,700 square-mile area was assessed for a variety of factors, including seafloor conditions; conflicting routes, such as those used for commercial fishing; the presence of protected wildlife species; and cultural resources, the DOI explains.

BOEM says it expects to now move forward with an environmental impact statement to address the potential effects of all five phases of the AWC. Atlantic Grid Holdings must submit, within 60 days, what BOEM calls a "general activities plan" (GAP) detailing all of the activities related to the construction of the project.

When BOEM receives the GAP, it will begin the environmental and technical reviews of the plan, the DOI explains.

"An entirely new industry'
According to the DOI, integrating wind power onto PJM's regional power grid would have wide-reaching benefits, including increased system reliability and reduced costs for consumers in the Washington, D.C., and New York metro areas.

"The AWC backbone will both relieve transmission congestion in one of the nation's most restricted power markets as well as enable the development of a huge offshore wind capacity that can bring stability and security to the eastern power grid," said John Breckenridge, managing director at Good Energies, in a statement. "With this line in place, offshore projects can be constructed at a lower cost, with less impact on the environment and with the ability to deliver power wherever it is needed along the Mid-Atlantic coast."

According to Bob Mitchell, CEO of the AWC, the project will do more than just improve the grid and lower costs. In fact, he said, the transmission backbone is a prerequisite for the development of a solid offshore wind industry in the U.S.

"Studies conducted in Europe and the U.K. show that a backbone grid is critical to the success of large-scale offshore wind and could reduce the cost of offshore wind by 25%," Mitchell noted in a press release. "This milestone allows the AWC to proceed to intelligently plan for the backbone transmission system that is necessary for an entirely new, robust offshore wind industry to develop in America.

"There is no reason for the United States to have to yield all of the factories and jobs to Europe and China," Mitchell added.

Daniel Dobbeni, CEO of Elia Group, agrees that the project has the potential to jump-start an industry that has so far been dormant and plagued by uncertainty in the U.S.