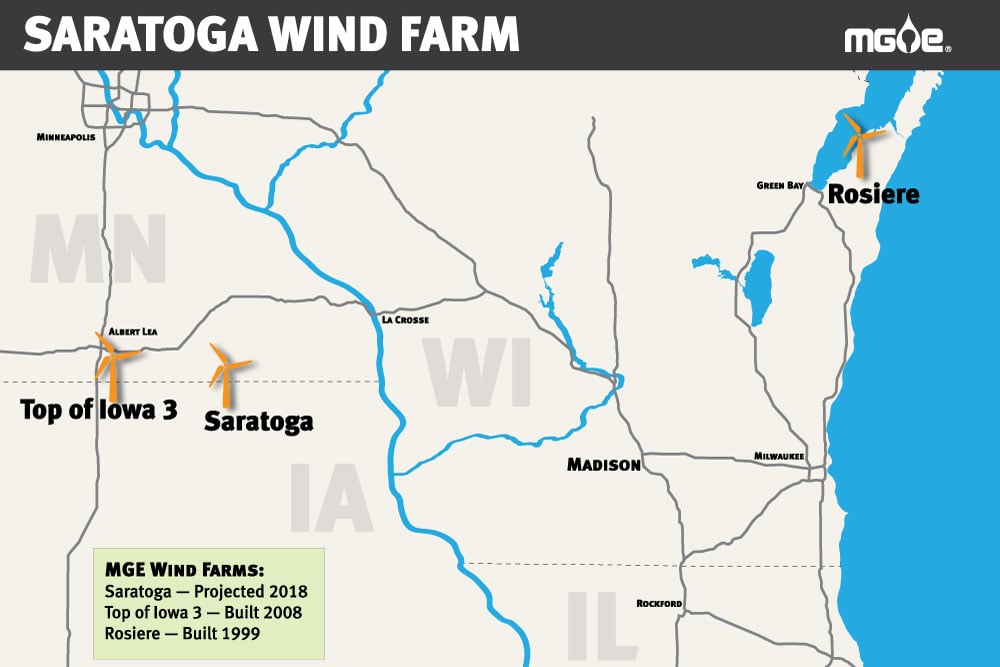 Wisconsin’s Madison Gas and Electric (MGE) has announced a proposal to construct, own and operate its largest wind farm to date: the 66 MW, 33-turbine Saratoga project, to be situated in Howard County, Iowa.

The wind farm would be located about 200 miles west of Madison, Wis., near Saratoga, Iowa. If approved by regulators, the project’s construction could begin in early 2018. It would deliver enough energy to power approximately 47,000 homes by the end of that year, the utility says.

MGE says the turbines would extend nearly 500 feet tall, which is 100 feet higher than those at MGE’s Top of Iowa wind farm, built in 2008.

The wind farm would also advance the utility’s commitment to increasing clean energy and further reducing carbon-dioxide emissions under its Energy 2030 framework.

“With recent advances in technology, this project represents a long-term, cost-effective strategy for MGE to continue to transition to cleaner energy sources,” comments Gary Wolter, chairman, president and CEO of MGE.

Under the Energy 2030 framework, MGE has pledged to supply 30% of electric sales with renewable resources by 2030; this includes a milestone goal of 25% by 2025. The company will also work with customers to reduce carbon emissions 40% from 2005 levels by 2030.

MGE says it began identifying possible locations for a new wind project more than a year ago, and negotiations for the Saratoga site began last summer. MGE secured the rights to the construction-ready site last year from the site’s initial developer, RPM Access LLC, which had designated the site for wind development.

MGE estimates the total capital cost of the project to be about $107 million. The utility also plans to take advantage of federal renewable production tax credits.

MGE has already filed with the Public Service Commission of Wisconsin a letter of intent to seek approval for the project; the company anticipates filing its formal application in March.