“We’re becoming cleaner and greener,” says Mark Sidebottom, NSP’s vice president of power generation and delivery. “Nova Scotians depend on us to provide the electricity they need for their homes and businesses every day, and they want that electricity to come from more sustainable sources.”

NSP says its performance on renewable energy exceeded the legislated 2015 requirement of 25% renewable electricity, as well as positions the company well to meet the 40% renewable requirement that takes effect in 2020. As recently as 2007, only 9% of Nova Scotia’s electricity was renewable. Also by 2020, NSP will have reduced greenhouse-gas emissions by 25%.

“We have made remarkable progress in Nova Scotia,” states Sidebottom. “No other utility in Canada has made this rapid of a transition. In 2020, we will have a greater percentage of our electricity coming from renewables than Germany, which is often recognized as a world leader in renewable energy. 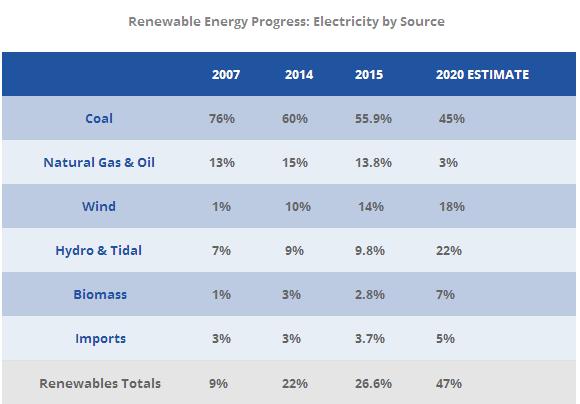 “Coming out of the Paris climate accord, it’s clear that we’re moving globally toward a lower-carbon future,” he continues. “Guided by provincial legislation that enables made-in-Nova Scotia solutions, we’re making great progress on reducing emissions and adding renewable energy in a manner that’s affordable for Nova Scotia families and businesses.”

While NSP is achieving new records in renewable electricity, the company says it is also stabilizing power rates. For most customers, rates did not increase in 2015 and have gone down in 2016.

Nova Scotia’s growth in renewable electricity has been largely through the development of wind power. According to NSP, there are now 294 commercial wind turbines producing electricity in Nova Scotia. Most are independently owned. At times, wind power has accounted for as much as 50% of the province’s electricity.

However, there are other times when almost no electricity is coming from wind, so the utility has to have other generation sources on hand for backup to supply customers: NSP says the Maritime Link, delivering hydroelectricity from Muskrat Falls, will provide a firm source of renewable electricity, and help push Nova Scotia Power to more than 40% renewable electricity by 2020.