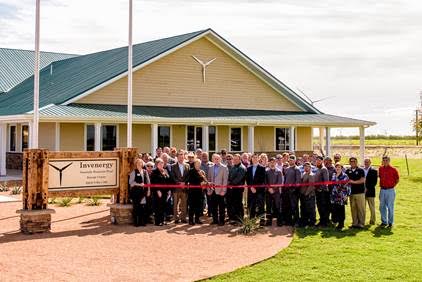 Invenergy employees, 3M representatives and several members of the community gathered for the ceremony to officially mark the opening of the facility.

3M, a global science-based company, signed a power purchase agreement with Invenergy earlier this year. The company has a goal of increasing renewable energy to 25% of its total electricity use by 2025.

The facility is located in Howard County (which is about 20 miles north of Big Spring) and connects to the ERCOT electricity market at the Buzzard Draw Switching Station – Big Spring/China Grove 138 kV transmission line via a new station named Gunsight Mountain Switching Station.

“Renewable energy procurement by off-site corporations nearly tripled between 2014 and 2015. This is one of the most exciting changes occurring in the industry, and Invenergy is thrilled to be at the forefront of this trend,” said Bryan Schueler, senior vice president of development at Invenergy.

The Gunsight Mountain Wind Energy Center has a full-time staff of nine employees. In all, says Invenergy, the facility is expected to contribute more than $2 million annually to the local economy in the form of tax payments, staff salaries, and the purchase of local goods and services.

With the addition of the Gunsight Mountain Wind Energy Center, Invenergy now has a wind project portfolio that includes more than 7,650 MW of capacity.