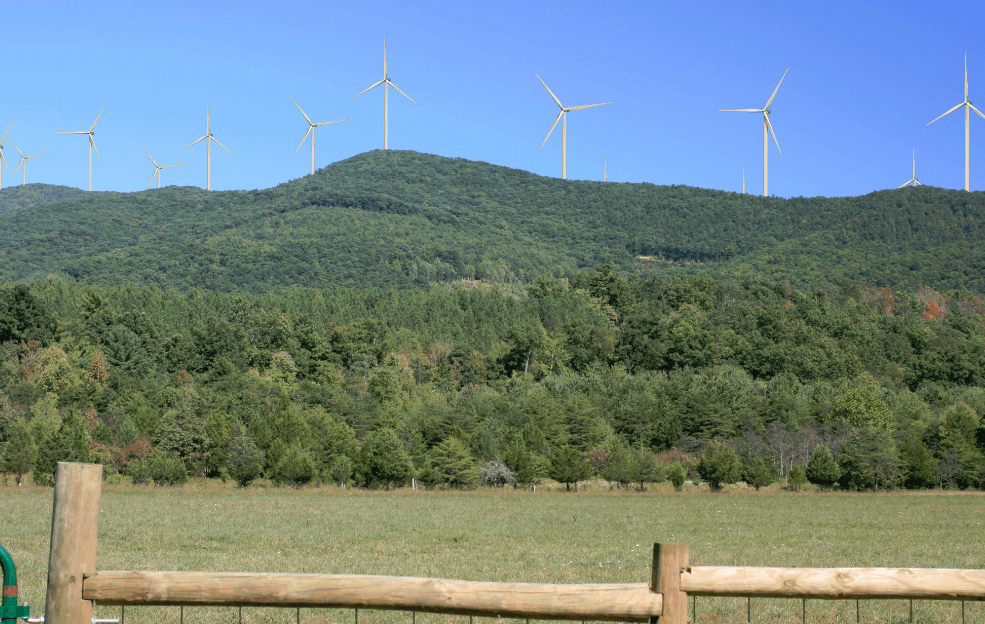 After more than two years of planning and permitting, the Virginia Department of Environmental Quality (DEQ) recently approved Apex Clean Energy’s application for the up-to-80 MW Rocky Forge wind farm – the first such project to be built in the state of Virginia.

Located in northern Botetourt County, Rocky Forge will feature up to 25 wind turbines on private land along the ridgeline of North Mountain. Once complete, the project is expected to generate enough energy to power 20,000 homes each year.

According to the Charlottesville-based developer, this location was selected from a number of other potential Virginia sites due to its strong, “data-verified” wind resource; existing high-voltage power lines; and proximity to state highways.

“It’s a ridgeline project, so there are a lot of considerations you wouldn’t have for a project elsewhere, but this is one of the best sites in the state for wind energy,” says Kevin Chandler, senior manager of federal affairs for Apex Clean Energy.

Having already secured zoning approval from the Botetourt County Board of Supervisors, siting approval from numerous federal agencies and a local special exception permit, the DEQ’s approval – called a permit by rule – was the final step before Apex Clean Energy could move forward with construction.

As part of this last approval, the DEQ accepted Apex Clean Energy’s plan to avoid and minimize impacts to the environment and wildlife – notably, for four bat species in the area listed by the state as either endangered or threatened.

As specified in the mitigation plan, the Indiana bat, tri-colored bat, little brown bat and northern long-eared bat “may migrate through the project area and may be at risk of collision with operating turbines during the migration period.”

Chandler explains that the mitigation plan for Rocky Forge was developed in coordination with the U.S. Fish and Wildlife Service, the Virginia DEQ and other third-party contractors using the latest bat behavior research to help avoid take of state-listed bats or significant adverse impacts on their habitats.

“We have a strong wildlife team on staff to help us interface with wildlife agencies and third-party wildlife consultants,” he says. “This helps ensure we develop appropriate, site-specific layouts and operation plans for our projects. In the case of Rocky Forge, we have an appropriate plan to minimize impacts to bats.

“Research has shown that bats are most active during certain times of the year at low wind speeds,” Chandler explains. “The plan involves curtailing nighttime energy production during the times when bats are most active – when wind speeds are below 6.9 meters per second, from May 15 to November 15, when temperatures are above 38 degrees.”

Further, the plan dictates that Apex Clean Energy will avoid clearing trees within 150 feet of known northern long-eared bat roost trees from April 1 to Sept. 15 and within 5 miles of the bats’ caves from April 1 to Nov. 15.

As the first commercial wind project approved in Virginia, Rocky Forge was met with some concern during the public-comment periods, mostly surrounding the visual impact from the 500-foot-tall turbines – yet the majority of submitted comments voiced support for the project, with 43 in favor and 36 against.

According to Chandler, Apex Clean Energy has been “consistently impressed” by the amount of public support for the project.

“We’ve received endorsements from groups as diverse as the Virginia Deer Hunters Association, the local Sierra Club and the county Chamber of Commerce,” he says.

In a written statement, Dan Crawford, group chair for the Roanoke Group of the Virginia Chapter of the Sierra Club, asserts, “Virginians overwhelmingly want more renewable energy, and wind power offers one of the cleanest, safest forms of electricity generation. Rocky Forge Wind is a great step toward growing the commonwealth’s clean energy.”

On the state level, this project will help meet Virginia’s carbon-reduction goals, as recently ordered by Gov. Terry McAuliffe. Last month, the governor signed Executive Directive 11, which specifically instructs the DEQ to establish regulations in Virginia that will reduce carbon emissions from power plants.

This directive comes on the heels of Executive Order 57, which called on the state’s secretary of natural resources to “convene a work group to study and recommend methods to reduce carbon emissions and build Virginia’s clean energy economy,” according to the governor’s office.

Moreover, wind development, like Rocky Forge, can have a particularly strong impact when sited in rural areas, as it diversifies the county’s economy, boosts local employment and increases revenue.

According to Chandler, Rocky Forge represents a significant investment in rural Botetourt County, bringing between $20 million and $25 million in state and county tax revenue to benefit the local government, schools and first-responders over the project’s lifetime.

As for job creation, the new wind farm is expected to create up to 150 positions during construction and maintain six or seven full-time permanent employees during operations.

Looking ahead, Apex Clean Energy believes that wind energy will become increasingly important for the state of Virginia due to its benefits as a fuel source and potential as a revenue generator for local counties.

The developer plans to break ground on Rocky Forge by the end of this year.