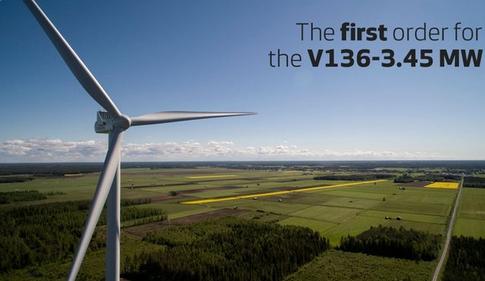 After unveiling its V136-3.45 MW wind turbines in September, Vestas has announced its first order for the new machines: Energy company EPV Tuulivoima Oy has ordered 34 of the turbines for the 117 MW Metsala wind farm in Finland.
The contract includes supply and installation of the turbines, as well as a 10-year Active Output Management (AOM) 5000 service agreement. Delivery of the turbines is expected to begin in 2017.

‘We are proud to install our biggest onshore wind park and place the first order for Vestas' new V136-3.45 MW turbine," comments Frans Liski, managing director of EPV Tuulivoima Oy. "We have chosen the V136-3.45 MW, as it will deliver increased energy output and thus provides us an optimal choice within the Metsala project site constraints."

As Vestas explained in September, the V136-3.45 MW is a new variant in the company's 3 MW turbine class, and the machines are designed to increase the energy output and reduce both the levelized cost of energy and sound emissions in low-wind conditions. For example, Vestas said annual energy production will increase by more than 10% compared with the V126-3.3 MW model.