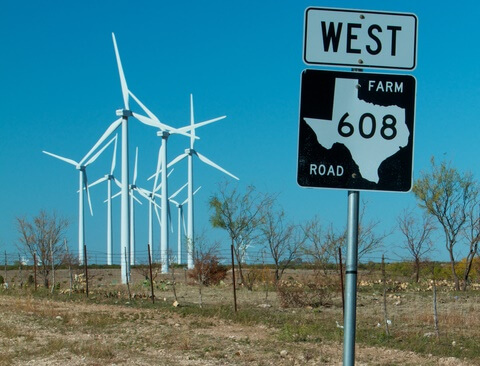 According to her statement of intent, the legislation “protects the long-term viability of Texas bases to carry out their missions.” Specifically, it eliminates the property tax exemptions for wind farms located “within 25 nautical miles of the boundaries of a military aviation facility,” according to the text of the bill.

The legislation applies only to agreements that are “entered into or pending on or after” Sept. 1, when the bill goes into effect.

Campbell claims that “encroaching wind farms” near military bases could “impede operations and create safety risks for pilots and related personnel.” Furthermore, she says the “enormous size” of the machines makes them capable of creating interference with radar systems.

In turn, the senator says wind turbines could pose a “serious threat to mission readiness at the state’s military aviation installations” – in turn, “increasing the likelihood for base reductions and/or closures by the U.S. Department of Defense.”

The bill, Campbell adds, will thus “prevent taxpayer dollars from being used to subsidize structures that could ultimately have a serious negative impact on the state’s economy and threaten the very existence of active military bases and the support they provide local communities.”

Jeffrey Clark, president of The Wind Coalition, recently spoke out against the bill and stated that yes, the “economic viability of our military bases should be the top priority,” but there are already processes in place to make sure a project would not impact a military facility. He also claims a Texas wind farm has never been built with the objection of either the military or the Federal Aviation Administration.

“By following the federal process and using data – not conjecture and hyperbole – to assess projects, we can ensure that private property values are maintained and that landowners’ rights are ensured, except in cases where our military’s mission justifies taking them away,” Clark wrote in response to a recent media report on the legislation.

“Attacking projects before those assessments are made is unfair to the private rural landowners and school districts relying on this development to help improve their own economic future. It is unfair to Texas consumers who benefit from the cleaner, cheaper electricity that these projects provide,” he added.

Further, according to a House analysis of the legislation, those against the bill also say “existing review processes by the U.S. Department of Defense already guarantee that wind farms and bases can coexist.” In addition, they also said wind developers are “investing in improvements to radar systems.”

“Chapter 313 agreements pertaining to wind farms should not be prevented, as they provide jobs and ensure Texas is competitive in the alternative energy industry,” they said.

S.B.277 certainly isn’t the first bill of its kind: Earlier this year, U.S. Sen. John Cornyn, R-Texas, proposed the “Protection of Military Airfields from Wind Turbine Encroachment Act.” A companion House bill was also introduced by U.S. Rep. Chris Collins, who, along with Cornyn, proposed bills with the same intention in 2016, as well.