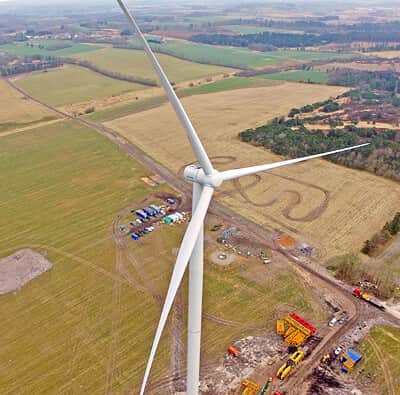 The IEC Class IIIA wind turbine is the first Siemens model to be equipped with rotor blades based on hybrid-carbon technology, the company says. With tower configurations allowing hub heights of up to 165 meters and 69 meter rotor blades, the SWT-3.15-142 will set new standards in energy yield, according to Siemens.

This low-wind turbine, part of the company’s onshore, direct-drive product platform, uses the same nacelle as other models, such as the SWT-3.6-130. This includes major components such as the hub, generator, and cooling and electrical systems. However, this model boasts an improved efficiency: Even at average wind speeds of only 6 m/s, the turbine has an energy yield of 10 GWh/year, says Siemens.

“In our extended onshore product portfolio, the SWT-3.15-142 plays an important role, since it is our first IEC Class IIIA wind turbine for this platform,” says Morten Pilgaard Rasmussen, head of technology at Siemens Wind Power. “With LM’s hybrid-carbon blades and our successful direct-drive technology, this model incorporates proven and highly efficient technology in all components, and we are confident that we can maintain short time to market and have this product ready for serial production by the end of 2017.”

Siemens Wind Power expects the prototype at Drantum to be fully operational by the end of this month.