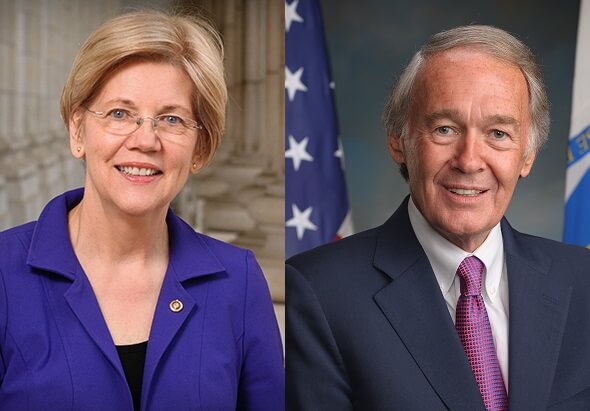 U.S. Sens. Elizabeth Warren and Edward J. Markey, both D-Mass., are speaking out against the recent federal decision to delay Vineyard Wind’s offshore project, proposed off the coast of Martha’s Vineyard, Mass.

“The Trump administration’s last-minute decision to delay approval of a major offshore wind energy project is extremely disappointing,” states Warren. “The Vineyard Wind project – which is projected to create thousands of jobs and generate clean energy for over 400,000 families and businesses across the commonwealth – would save money for Massachusetts ratepayers, reduce carbon emissions by over 1.6 tons per year and help the commonwealth reach its clean energy targets by 2035.

“Despite these benefits, the Trump administration has chosen to hinder this important project and continue to put corporate polluters’ profits over Americans’ well-being,” continues Warren. “I urge the administration to work towards a solution that will protect the environment, address the concerns raised by our local fishermen and allow the Vineyard Wind project to move forward without delay.”

In December 2018, Warren joined Markey; U.S. Rep. William Keating, D-Mass.; and U.S. Sens. Sheldon Whitehouse, D-R.I., and Jack Reed, D-R.I., in writing to BOEM to urge consensus between offshore wind and fishing interests. Warren is also a co-sponsor of the Offshore Wind Incentives for New Development Act, legislation that would spur the growth of U.S. offshore wind by extending tax credits for the renewable energy industry.

Markey, a member of the U.S. Senate Committee on Environment and Public Works, says, “Massachusetts and all of New England should be able to benefit from both robust fishing and offshore wind industries, but the Trump administration, led by a former oil lobbyist at the Department of Interior, seems dead set on stifling consensus and clean energy.

“The harmful consequences of delaying the nation’s first major offshore wind project in the final hours of the permitting process will be felt far beyond Massachusetts. It sends a clear and chilling message across this nascent industry that the Trump administration will do everything in its power to cut corners for oil and gas projects while cutting the chord on the next frontier of clean energy deployment,” Markey continues. “The Trump administration’s delay of offshore wind means a delay on unleashing thousands of jobs across our state, a delay in Massachusetts leading in developing the next frontier of clean energy, and a delay that our planet cannot afford to reduce global warming pollution. That is unacceptable.”

If I remember well this type of project has been in the works for more than a decade, but people conveniently seem to forget that most of the opposition came from very notorious families in the area. Let us be fair and state the facts.
A very observant engineer.