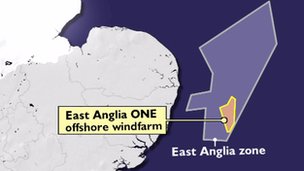 The estimated 714 MW output is enough to power the equivalent of 500,000 homes, according to ScottishPower. East Anglia ONE will consist of 102 turbines approximately 26 miles off the coast. Construction is planned to commence in 2017, and the investment includes a $35 million deal with the Port of Lowestoft to be the home of the wind farm for 30-plus years, during construction and operation phases.

“East Anglia has some of the best conditions anywhere in the world for the development of offshore wind, and we are fully committed to the region, with future developments already in the pipeline,” says Charlie Jordan, ScottishPower Renewables East Anglia ONE project director.

East Anglia ONE is the first of four wind farms ScottishPower Renewables is planning to build off the east coast of the U.K.