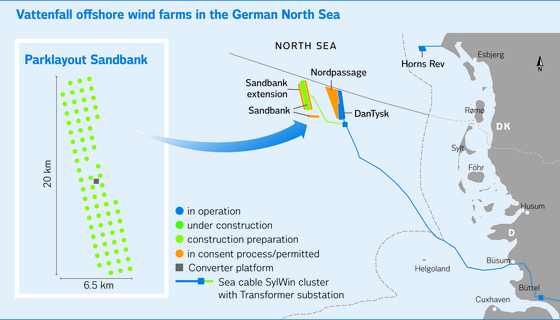 Vattenfall and Stadtwerke Munchen’s Sandbank offshore wind farm was fully connected to the grid on Jan. 25.

The project, which was completed three months ahead of schedule, started producing power in September. The 288 MW project, located 90 kilometers west of the German island of Sylt, comprises 72 4 MW Siemens wind turbines, the first of which was installed at the end of July 2016.

The investment costs for the project totaled roughly EUR 1.2 billion. Vattenfall holds a 51% stake in Sandbank Offshore GmbH, which was set up to implement the project, while Stadtwerke Munchen holds a 49% stake.

Sandbank is the second joint offshore wind project for the two companies. Along with sister project DanTysk, which has been in full operation since early 2015, these two wind farms total 576 MW.