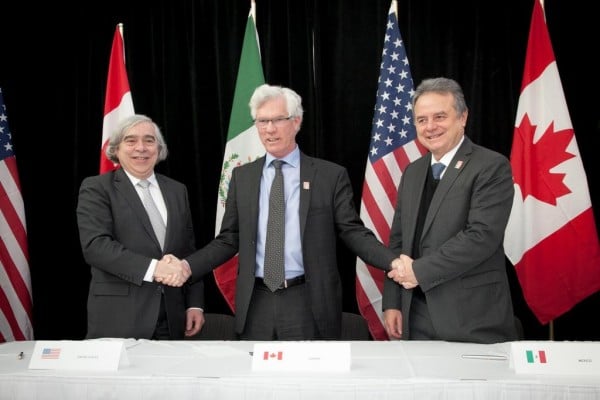 During the meeting, the leaders signed a memorandum of understanding (MOU) on climate change and energy collaboration, which will expand the energy relationship between the three countries. This agreement will see Canada, Mexico and the U.S. collaborate and share information on key areas, such as low-carbon electricity; clean energy technologies; energy efficiency; carbon capture, use and storage; climate change adaptation; and reducing emissions from the oil and gas sector, including from methane.

According to a press release from the Canadian government, the three countries will work together to increase alignment and ensure that the North American energy sector is developed responsibly, effectively and efficiently.

The meeting also provided an opportunity to assess the progress made over the past year on energy cooperation. The three countries worked closely on mapping North American energy trade and infrastructure, sharing energy data and promoting reforms and new business opportunities. The leaders launched a web platform featuring new energy maps, which depict North American energy resources, production and infrastructure in a single place. This information is meant to be helpful to energy users and stakeholders.

Between Canada, the U.S. and Mexico, C$167 billion (approximately $120 billion) worth of energy products were traded in 2015 across the continent, highlighting the importance of North American energy cooperation, says the Canadian government.

“Secretary Moniz, Secretary Joaquin Coldwell and I want to build on North America’s strength as one of the world’s most dynamic and influential regions for secure and sustainable energy,” says Carr. “The memorandum of understanding we signed reflects our governments’ shared vision for a future where an expanding clean energy sector, a sustainable environment and a strong economy go hand in hand.”

Jean-Francois Nolet, vice president of policy and communications at the Canadian Wind Energy Association (CanWEA), has welcomed the MOU.

“These signatures kick off the start of discussions on a North American accord on climate change and clean energy,” says Nolet. “The MOU reflects a step change in ambition for action in Canada and across North America that will have a tremendous impact on our ability to go beyond reducing greenhouse-gas emissions from electricity generation.

“It promises opportunities to move toward the much deeper cuts needed across other sectors that stand to be electrified with clean, zero-carbon renewables like wind energy.”