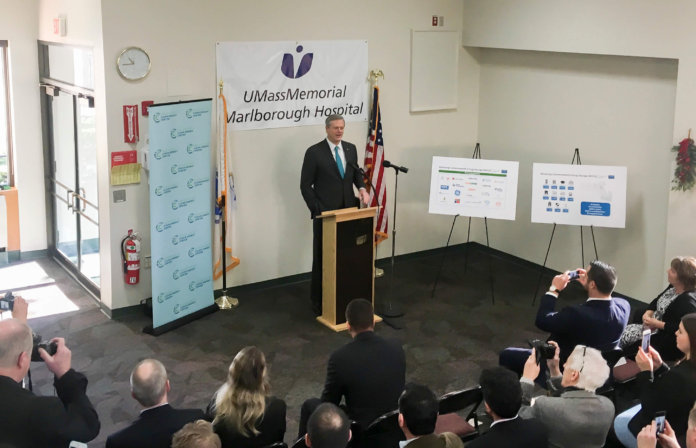 Massachusetts’ Baker-Polito administration has awarded $20 million in grants to 26 energy storage projects in the state.

Recognizing the benefits energy storage holds for the commonwealth, as well as the strength of the submitted projects, the administration says it doubled the available funding from the initial $10 million commitment. The awarded projects will benefit 25 communities and draw in $32 million in matching funds, helping to grow the state’s energy storage economy.

The announcement was made by Gov. Charlie Baker, R-Mass., during an event at UMass Memorial – Marlborough Hospital. The critical-care facility will use funding received under the grant program to integrate a 400 kW solar canopy and energy storage system.

“The development and deployment of energy storage projects will be vital to the commonwealth’s ability to continue leading the nation in energy efficiency,” says Baker. “Funding these storage projects is an investment in our energy portfolio that will reduce costs for ratepayers and help create a clean and resilient energy future.”

“Massachusetts has a rich history of leadership in innovation, and this storage grant program is another important step for the commonwealth’s energy industry,” adds Lieutenant Gov. Karyn Polito, R-Mass. “We look forward to these projects playing an important role in their local communities and delivering the many benefits energy storage can provide to Massachusetts ratepayers.”

In June, in accordance with the energy diversification legislation signed by Baker in August 2016, DOER announced a 200 MWh energy storage target for the state’s three electric distribution companies to achieve by Jan. 1, 2020. The projects awarded under the ACES program represent a total of 32 MW and 85 MWh of energy storage capacity, of which 16 MW and 45 MWh are within electric distribution company territory. Massachusetts currently has approximately 4 MW and 7 MWh of advanced energy storage installed.