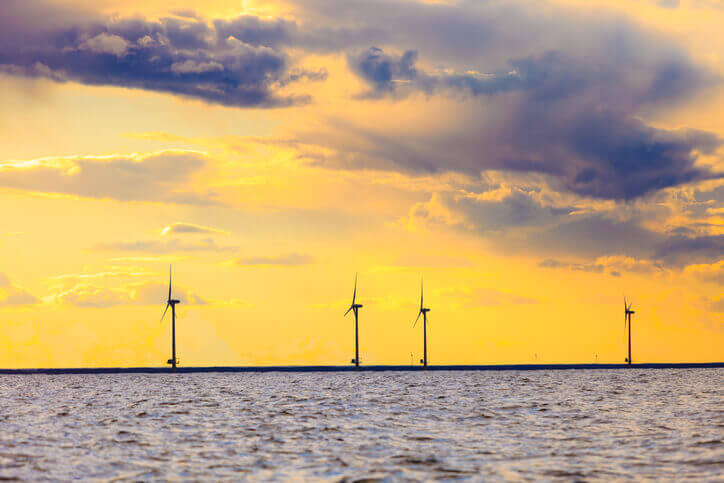 The Maryland Public Service Commission (PSC) has authorized 368 MW of offshore wind capacity in the Atlantic Ocean, clearing the way for both US Wind and Deepwater Wind affiliate Skipjack Offshore Energy, which were vying to use Maryland’s offshore renewable energy credits (ORECs) to finance the project.

The PSC wrote in its order, “The ‘all-in’ approach to offshore wind that we undertake today signals to our neighbors and the world that Maryland is ready to serve as a regional hub and a substantial base for additional offshore wind development up and down the East Coast, thus yielding sustained job growth for many years to come.”

It is expected that Maryland will realize nearly 9,700 new jobs, as well as the associated economic and tourism benefits, that will follow.

US Wind, which was founded in 2011 and is fully owned by Italy-based Renexia S.p.A. and a subsidiary of Toto Holding Group, proposes to construct a 750 MW wind farm project off the coast of Maryland, for which the company seeks ORECs to support the development of 248 MW of offshore wind capacity. US Wind expects the 248 MW project to cost approximately $1.375 billion, or $5,544/kW, according to its application.

US Wind undertook a marine survey of the ocean floor in 2016 and recently received the final permit for a meteorological station on the site. The company anticipates the project being fully energized on Jan. 1, 2020.

Skipjack proposes to construct a 120 MW wind farm project approximately 17 to 21 nautical miles off the coast of Maryland in the Delaware wind energy area designated by the Bureau of Ocean Energy Management (BOEM). In its application, Skipjack states that it intends to utilize an 8 MW class turbine and monopile foundations for the turbine installation. Skipjack states that its targeted commercial operation date is November 2022.

According to Skipjack’s application, the planned point of interconnection (POI) will be at a substation located in Ocean City, with the POI established during the PJM interconnection process, which has not yet been started. Skipjack expected the 120 MW project to cost approximately $720 million, or $6,000/kW.

The decision ends nearly a year of speculation about which offshore wind developer would secure Maryland. In 2014, US Wind bid on and won two leases offshore Ocean City as part of BOEM’s third offshore wind lease auction.

For its part, Deepwater Wind, which operates the first and only offshore wind farm in the U.S., is a relatively new entrant in the state. In fact, its Maryland application was submitted on Aug. 23, 2016. In addition, Deepwater Wind cleverly entered Maryland by way of Delaware by acquiring an offshore wind lease for 96,400 acres for an offshore site formerly known as the Mid-Atlantic Wind Park.

Establishing site control enabled Deepwater to satisfy the Maryland requirement to qualify for the state OREC.

Both developers plan to use Maryland’s ORECs created through Maryland’s Offshore Wind Energy Act in 2013. It will be the first time in the U.S. offshore wind industry for developers to finance a project through the so-called state model – as opposed to a traditional power purchase agreement with a utility. There is a similar OREC model in New Jersey; however, Gov. Chris Christie, R- N.J., has yet to formally authorize the finance mechanism, effectively shelving the Fishermen’s Energy offshore wind farm.

“The decision is in, and now we’re ready to get to work,” says Paul Rich, US Wind’s director of project development. “US Wind wants to thank the PSC for this favorable decision, as well as Gov. Larry Hogan and Commerce Secretary Mike Gill for showing that Maryland is truly ‘open for business.’ Maryland is now the undisputed national leader for offshore wind.”

The PSC notes the impact to ratepayers is projected to be less than $1.40 per residential customer and 1.40% to non-residential customers. The agency also says that its award requires US Wind and Skipjack to acquire the necessary federal permits and continue to work with Maryland stakeholders to address “environmental, visual and other impacts of public concern.”

Nonetheless, the news was welcomed by industry observers.

“Maryland no longer stands at the doorstep of ushering in this new industry; it has stepped over the threshold,” says Liz Burdock, executive director of the Business Network for Offshore Wind. “The award of these projects is the launching point for great economic growth for Maryland: its businesses and its citizens. Maryland continues to lead – achieving the first commercial-scale offshore wind projects in the U.S., as well as reaping the environmental benefits of this large-scale, clean, renewable energy.”