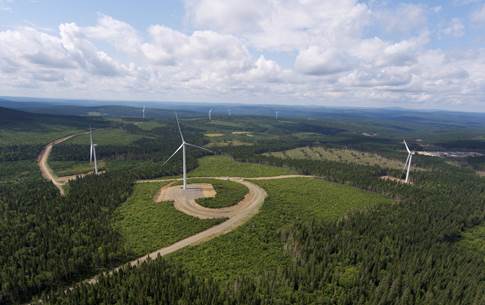 Roncevaux is located in the Ruisseau-Ferguson unorganized territory in the regional county municipality (RCM) of Avignon, approximately 500 kilometers east of Quebec City.

“We’re pleased to complete this important milestone together with our local community partners,” comments Bryan Schueler, Invenergy’s senior vice president of development. “We were faced with an ambitious timeline for this project, and thanks to the strong relationships and collaboration with our partners, we were able to accomplish our goals for making Roncevaux operational before the end of 2016.”

“The realization of the Roncevaux project with our partners, Gaspesiens and Invenergy, represents a breath of fresh air for the RCMs, the Maliseet First Nation of Viger and our 200,0000-citizen shareholders who will have access to significant profits for the next 25 years,” adds Michel Lagace, chairman of Energie Eolienne Bas-St-Lauren.