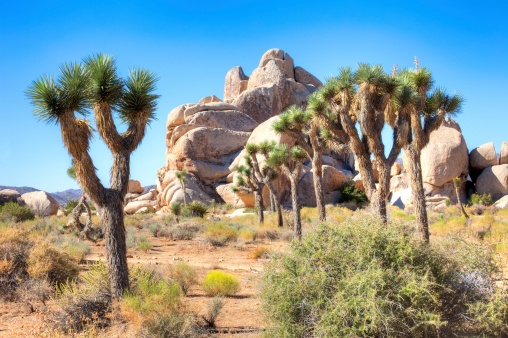 The U.S. Department of the Interior (DOI) and California Natural Resources Agency have announced the final environmental review of a land-use plan meant to expedite the permitting process for renewable energy development and support conservation on 10 million acres of federal public lands in the California desert.

The release of the final environmental impact statement for Phase I of the Desert Renewable Energy Conservation Plan (DRECP) comes after the agencies revealed their draft plan in September 2014 and held a public-comment period. Having spoken out about concerns for wind power development when the draft was released, the California wind industry maintains its reservations.

According to the DOI, the blueprint is part of a larger, comprehensive effort with California and covers 22 million acres in the state's desert region. Collectively, the agency says, these lands contain the potential to generate up to 20 GW of renewable energy development while meeting federal and state renewable energy and climate change goals through 2040.Â Â

The DOI says Phase I of the DRECP, which is managed by the Bureau of Land Management (BLM), designates development focus areas (DFAs) with high-quality solar, wind and geothermal energy potential and access to transmission – allowing impacts to be managed and mitigated. The agency says applications will benefit from a streamlined permitting process with predictable survey requirements and simplified mitigation measures, and the DOI is considering additional financial incentives through an ongoing rulemaking process.

However, when the draft was published, California Wind Energy Association (CalWEA) said the DRECP's provisions could "end most wind energy development" in the state because the plan did not "properly evaluate the limited habitat impacts of wind energy."

Now, according to a blog post co-authored by the American Wind Energy Association (AWEA) and CalWEA, the plan still "presents a challenge" and has "the potential to cause some headaches," including for meeting the goals of the federal Clean Power Plan, as well as California's Clean Energy and Pollution Reduction Act of 2015.

Notably, AWEA and CalWEA believe the plan could "dramatically limit the amount of new renewable energy growth in Southern California."

The first phase identifies national conservation lands and designates areas of critical environmental concern, wildlife allocations, and national scenic and historic trail management corridors to conserve biological, cultural and other values. Furthermore, the DOI says special recreation management areas and extensive recreation management areas are identified to recognize and promote recreational opportunities and public access. Thus, these lands would be closed to renewable energy and benefit from adaptive management in the face of climate change, the agency explains.

Thus, if the plan "eliminates about 80 percent of the best wind energy resources on BLM lands in California," CalWEA and AWEA predict that only 1 GW of wind capacity – "at best" – will be added.

The non-federal land component of the DRECP, Phase II, is ongoing. It is led by California and includes close coordination among federal, state, county and private land partners. The DOI says the phased approach provides additional opportunities for agencies to work with counties and other stakeholders to address issues and concerns. The department says county planning efforts are critical because these jurisdictions have primary land-use and permitting authority on private lands. The counties include Imperial, Inyo, Kern, Los Angeles, Riverside, San Bernardino and San Diego.

The DOI says that between the draft DRECP announced in 2014 and this new release of the BLM component, the agencies held 11 public meetings and received more than 16,000 comments. Based on these suggestions, the DOI says, the agencies made modifications to land area designations, provided more details on management of conservation lands, clarified how unallocated lands would be managed, refined the environmental analysis and reorganized the document for greater clarity.

The federal strategy for these 10 million acres of public lands is detailed in the BLM's proposed land-use plan amendment and final environmental impact statement. The notice of availability for these documents will be published in the Federal Register on Nov. 13, beginning a 30-day protest period, after which the DOI will issue a record of decision. This will conclude Phase I of the DRECP.

AWEA and CalWEA's full blog post can be found here.